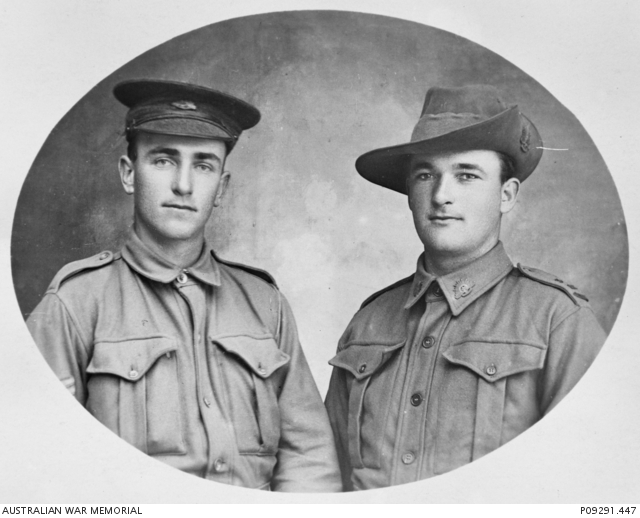 Studio portrait of 9 Sergeant (Sgt) Allan Isaac Davey, 32nd Battalion, and an unidentified Lieutenant. Sgt Davey was a school teacher from Terowie, South Australia, prior to enlistment and embarked with A Company from Adelaide on 18 November 1915 aboard HMAT Geelong for Suez. The battalion relocated to the Western Front, France, during June 1916. Sgt Davey was wounded in action during the Battle of Fromelles on 19 July 1916 and was treated in No 3 Canadian Stationary Hospital, Boulogne, before rejoining his unit nearly two months later. Sgt Davey attended No 5 Officer Cadet Battalion in Cambridge England commencing in early April 1917 and graduated as a Second Lieutenant (2nd Lt) on 4 August 1917 then rejoined his unit near Racquinghem later that month. 2nd Lt Davey was killed in action near Zillebeke on 22 October 1917. He was aged 23 years.