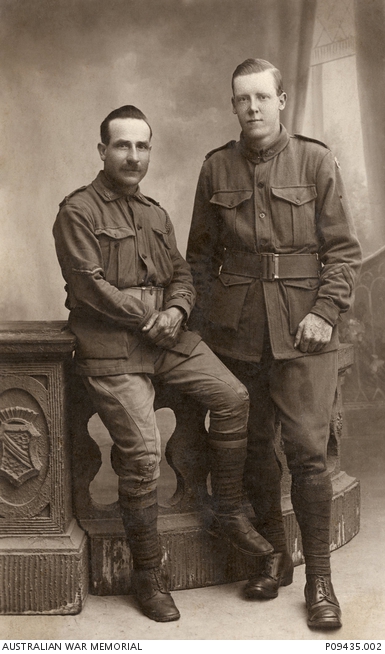 Studio portrait of Lance Corporal Bill Ross (left, unable to further identify) and 3262 Private (Pte) Archibald Gilbert Weeding, 18th Battalion, (right). A salesman prior to enlistment, Pte Weeding enlisted as an Acting Quartermaster Sergeant on 11 August 1915. He embarked from Sydney aboard HMAT Suevic (A29) with the 7th Reinforcements of the 18th Battalion. He reverted to the rank of Private on 19 February 1916 and was transferred to the 3rd Battalion on 15 April 1916. Pte Weeding was wounded in action on 18 August 1916. He rejoined his unit on 15 September 1917 and was killed in action on 7 October 1917, aged 26 years old. Bill Ross cannot be further identified.