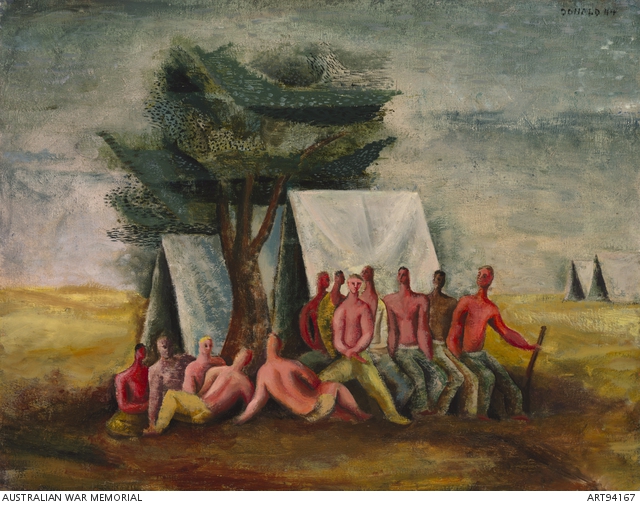 A group of twelve men rest next to tents and a tree at an Australian Military training camp. The man on the far right holds a rifle. This painting seems to have come after a drawing by Friend, held in the Memorial's collection, called 'Desert camp' 1943 (ART29770). An entry from Friend's diary from December 1943 suggests that the scene could be from Charter Towers camp in North Eastern Queensland. Friend travelled to Charters Towers camp in December 1943 at the end of his involvement with the anti-malarial experiment program. He noted in his Diary on 4 December 1943; 'I have been making ideas in my head for several days for a painting of this [place- very textured, with a tent, green-white against a hard light blue sky, and a dull-green tree, bare-coloured, parched and brittle as they are here. And a group of deep red men in jungle green and khaki, listeless, loinging in the dry light, on knobbly grey, pink and brownish ground. The sky must be flat, crisp, yet with a feeling of enormous space, and the ground must stretch back in a dry infinity of perspective. I think it will be quiet a big picture'.