[Sheet music] Your King and country want you : a woman's recruiting song 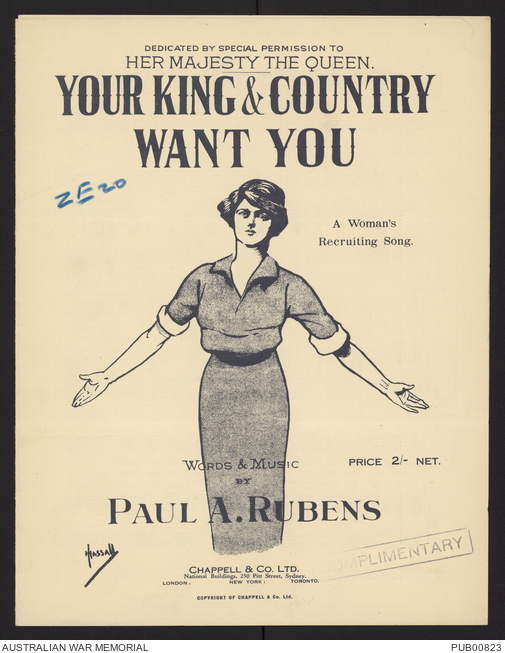 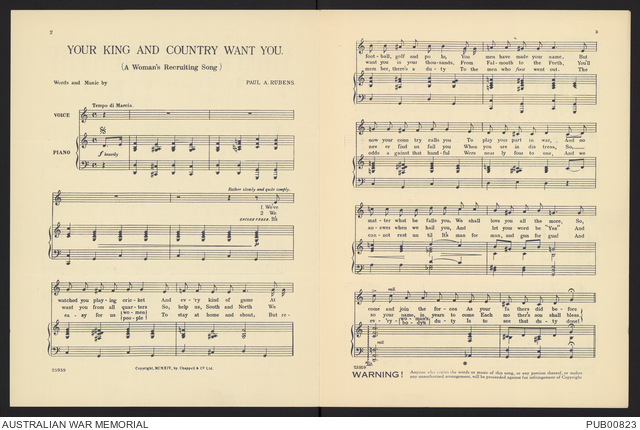 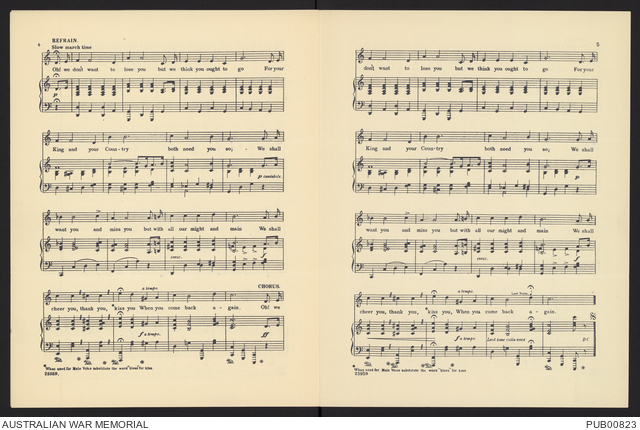 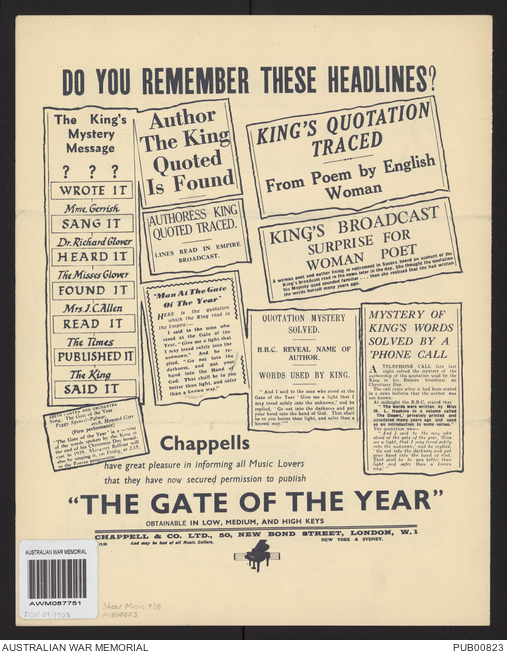 Sheet music for the song titled 'Your King and country want you: a woman's recruiting song'. This song was written by Paul Rubens and was published during 1914. It had an alternative title, drawn from the first line of the chorus, titled 'We don't want to lose you but we think you ought to go'. This copy of the music for this song was published by Chappell & Co, London, and features a picture of a woman on the front cover with her arms extended.

The back cover of this copy features a number of excerpts from newspaper headlines and articles in regards to a mysterious poem. The portrayal of these headlines was intended to support the news that Chappell & Co music publishers had secured the rights to publish the sheet music for the poem with its musical setting - 'The gate of the year'.

The song was written a woman's recruiting song with the intention of persuading men to enlist. The song lyrics were written for a female voice but alternative words were provided to allow the song to be performed by men and mixed vocal ensembles. It was reported to be the best seller of sheet music for the war effort and was popularised in Australia by the singer Miss Dorothy Brunton.

Paul Alfred Rubens was a British songwriter who composed material for the stage during the Victorian and Edwardian periods. He had no musical training and started writing music while a student at Oxford. At the age of 19, his song titled ‘The Little Chinchilla’ was picked up and featured in the show ‘The Shop Girl’ at the Gaiety Theatre, London. He is reported to have written some of the most popular songs of the Edwardian period.

The song titled 'Your King and country want you', was much better known in Australia under the titles of 'We don't want to lose you, but we think you ought to go' and 'We don't want to lose you'. Both of these alternative names were drawn from the first lines of the chorus. The lyrics of the song were first published in an Australian newspaper on 27 October 1914, when they were published under the title of 'Recruiting song' in The Daily News (Perth).

Miss Christine Dorothy Brunton, better known as Dorothy or Dot Brunton, was an Australian actress and singer during the First World War period who is credited to making this song famous in Australia. One report of her performance of the song commented that '...she sang it so well and put such real feeling into it that beyond doubt many men responded to the appeal and attended at the enlistment depot.' One true story of just how this was accomplished in reality is reported in several newspaper articles between 1917 and 1920, with The West Gippsland Gazette reporting on 31 July 1917: "It was bitterly cold as the soldiers crunched through the crushed snow and the slush of the trenches. Then it was that one of them gave voice to his feelings: 'This comes a'go'ng to plays', he said. 'I went and heard Dorothy Brunton sing 'We think you ought to go,' and I enlisted next day, and look at me now'. The soldier alongside was a newcomer to that particular part of the line, but he had long been on service. A look of incredulity stole over his face and changed into a smile. 'Shake', he said, 'Dorothy Brunton is my sister'."

There are many references in Australian newspapers during the First World War of the potential effect of this song on recruiting men from audiences when it was performed. Dorothy Brunton's performance was just one of these. Miss Grace Palorta's performance at the Garcia students annual picnic held in November 1914 was another with Freeman's Journal (Sydney), recording that she 'drove the hint home so charmingly, and convincingly that one felt sure every man in the audience would enlist straight away.' It also featured in the theatre performance of 'The girl on the film' at Her Majesty's Theatre, Sydney during early 1915 where the song was described as 'a patriotic appeal calculated to make any young buck in the audience with his best girl swiftly spring to attention and volunteer for the front.' There were also several references to the lyrics 'We shall cheer you, thank you, kiss you, when you come back again' in regards to returned service personnel. One of these instances occured during a performance of the song by a popular music hall performer in London on 13 February 1915 when two soldiers, wounded at the Battle of Mons, appeared during the chorus amidst much cheering.

This song was particularly popular in the Wimmera district of Victoria during the First World War where it was performed by the group of seven female entertainers from Horsham, Victoria called, The White Court Minstrels. The group travelled through the Wimmera during 1915, collecting money for the Belgian Relief Fund, the Patriotic Fund and the Red Cross. They appeared at Hamilton, Victoria on 29 July 1915 where 'We don't want to lose you' was collectively performed as a chorus by all seven entertainers, and a totla of 150 pounds raised for the Red Cross. At Minyip, Victoria, a sum of 55 pounds was secured for the Minyip Red Cross Society during a concert on 13 November 1915. Both here and at Rupanyup, approximately two weeks later, 'We don't want to lose you' was performed by Miss Church. The song was described in The Minyip Guardian and Sheep Hills Advocate with the following comments about the lyrics: '...in which an appeal is made for young men to take up arms, was very appropriate, in view of the critical period through which our Australian boys in the trenches are passing.' The Rupunyaup Spectator picked up this theme, reporting that it was 'a ladies recruiting song which stirred the house to cheers.' There were many other newspaper articles in Australia that also drew attention to the effect of the lyrics of this song on the audience.

This was also a very popular song at farewell and welcome home events for service personnel during the First World War. Private Max Weldon, Private Tom Stewart, Private Arthur Stewart and Private Charles Marshall arrived at Barkly, Victoria on Thursday 28 April 1916 after taking a car from Ararat, Victoria on the occasion of their final leave following their enlistment in the AIF. They were joined at Barkly by Private Will Cheeseman and Private Allan Driscoll the following day. A social evening and presentation was quickly organised that included a short musical program featuring ‘We don’t want to lose you’, performed by Miss Olga Weldon. The Triumph Hall was filled by local residents to farewell the Snowy River Boys who had enlisted in the AIF and were home on final leave: Corporal King; Private W Penney; Private F Foster; Private W Apps; Private A McInnes; Private I Quigley; Private J Webb; Private J O’Grady; Private H Robertson; Private A Winner; Private C Rein; Private H Bingley; Private A Jacobs and Private E Venables. Sapper McDonald was also welcomed home as part of the event as he had been invalided as a result of active service. One of the speakers during the evening recited the chorus of the song ‘Your King and Country want you’. A farewell for Chaplain Cecil Lonergan was held at Bathurst on Thursday 7 September 1916. The choir of the Patrician Brothers’ Schools, under the direction of Mrs Holkien, performed ‘We don’t want to lose you’ as part of the program of music and songs during the event. Lonergan enlisted on 9 September 1916 and served with the Australian Chaplains Department until his return to Australia on 4 January 1919.
This song was performed by Australian service personnel during the First World War. Trooper Charles Gilbert who served with the 4th Anzac Camel Battalion, wrote the following in a letter that was published in the Nepean Times on 29 January 1916: 'We had to wait at the station for about an hour for the second party, who left Liverpool by a later train, and after a while, as the wait began to be rather tedious, somebody was seized with a brilliant idea, and shouted out to our bandmaster - "What about some music?" - and the reply came with a yell - "Music". The bandmaster, like the real good sport he is, smilingly nodded to the boys, and soon the band became to play "Ragtime", "Australia will be there", "We don't want to lose you", and various other appropriate items which kept the boys alive till the other contingents arrived...'

This song also featured in fundraising events held for the war effort and associated appeals. It was performed by Miss Muriel Casey at a concert to raise money for the Red Cross held at Richmond School of Arts on 30 July 1915. Casey also performed this song for an Australia Day concert at Richmond on 31 July, year unknown.