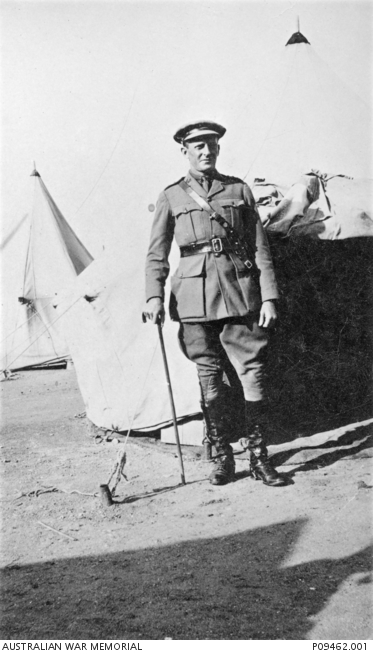 Informal portrait of Major Harold Stewart Ryrie, 6th Light Horse Regiment, standing in front of a tent. Ryrie had served as a Sergeant in the 5th Battalion Australian Commonwealth Horse (NSW) in the Boer War. A grazier from Trundle, NSW, prior to enlistment in the First World War, Ryrie embarked as a Second Lieutenant (2nd Lt) with B Squadron from Sydney aboard HMAT Suevic (A29) on 21 December 1914. 2nd Lt Ryrie served at Gallipoli and in the Middle East, reaching the rank of Major. In March 1918 Major Ryrie was severely wounded during an attack on Amman and returned to Australia in August 1918. He was awarded a Distinguished Service Order (DSO) for his actions in the Amman attack. On 10 December 1919 he died at No. 4 Australian General Hospital, Randwick as a result of his injuries.