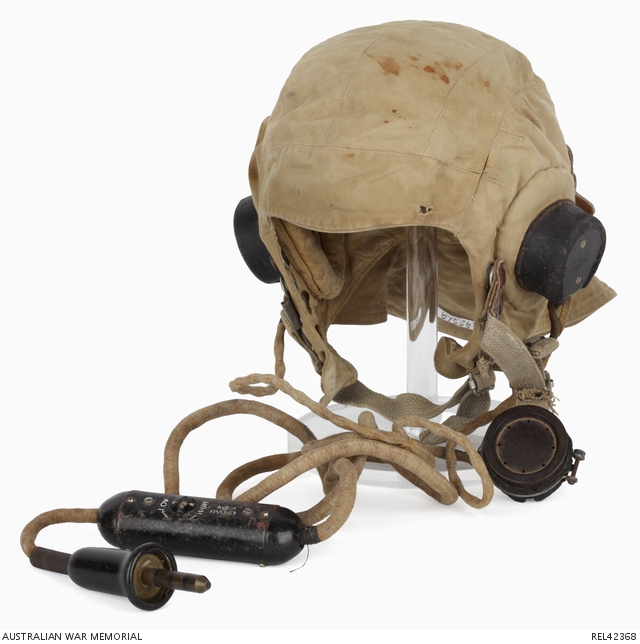 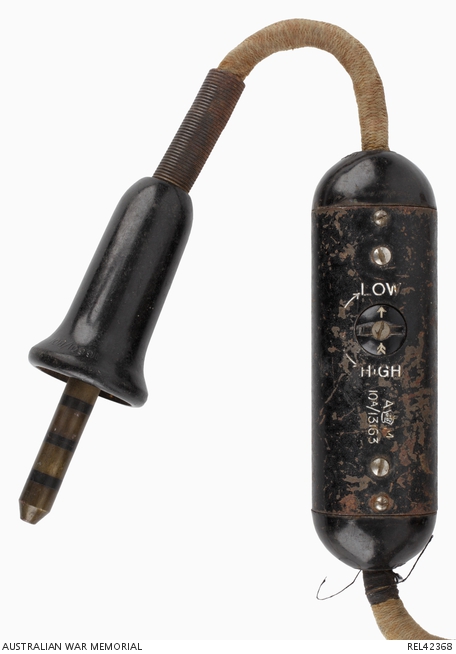 Lightweight cotton twill flying helmet with semi-circular rear flap for protection of the user's neck against sun. There is an elasticised section just above this flap. Supplied with external rubber ear cups and externally wired black bakelite earphones (marked 'AM 10A/12401') and padded internally with oval chamois donuts. The remainder is lined internally with polished cotton, with the exception of the brow piece, which is lined with brown velveteen. An adjustable cotton webbing chinstrap with snap fastener is fitted, while the sides and rear are supplied with leather goggle strap retainers - the sides are snap fastened, while the rear is equipped with a roller buckle. A pattern of four snaps down each side of the front of the helmet, plus a metal clip on the proper right side, allows either the D, E or E* oxygen masks to be fitted.

The earphones are wired to an external cotton braided harness into which the microphone is also wired. The microphone (marked 'AM 10A/12570') has been removed from the oxygen mask, retaining its cotton webbing strap and three-snap leather fastening and appears to have been modified by the user. The harness is supplied with a tubular in-line 'Low /High' frequency switch made from pressed metal and black bakelite, marked in white paint 'AM 10A/13163'. The harness then finishes in a heavy-duty black bakelite and brass pin plug.

Associated with the service of Flying Officer Arthur William Lehdey, who was born in Lithgow, NSW on 24 June 1914.

After obtaining his intermediate high school certificate, Lehdey worked as a shop assistant, rural worker and was working as a demolisher when the Second World War began. He enlisted on 11 October 1941 in Sydney and was accepted for aircrew training. After passing his initial training, Lehdey was posted to 5 Elementary Flying Training School at Narromine to begin pilot training, flying Tiger Moths.

Successfully passing this course, Lehdey was posted to Point Cook, Victoria in early May 1942 for flight training on Oxford aircraft. He was promoted to temporary sergeant in October and completed his course in November, before being posted to England for further flight training and conversion to Wellington bombers

Lehdey spent all of 1943 in England with various training and operational training units. In April 1944 that he was posted to the Middle East. He arrived in North Africa in May and was posted to 458 Squadron, then based in Italy, where he arrived in late June. He was immediately involved in operational flying in an anti-shipping and conventional bombing role. In August he took part in 458 Squadron's support of the Allied invasion of Southern France.

On 26 January 1945, 458 Squadron relocated to Gibraltar. For the remainder of the war, Lehdey flew escort duty for Allied convoys and continued to search for German submarines in the Western Atlantic.

After the end of the war in Europe in May, 458 Squadron was disbanded on 9 June. Lehdey embarked from England for Australia on 14 October, disembarking in Sydney on 4 November. He returned to Orange, NSW where he married Avis Hockey on 17 November. Lehdey was discharged from the RAAF on 21 December 1945.