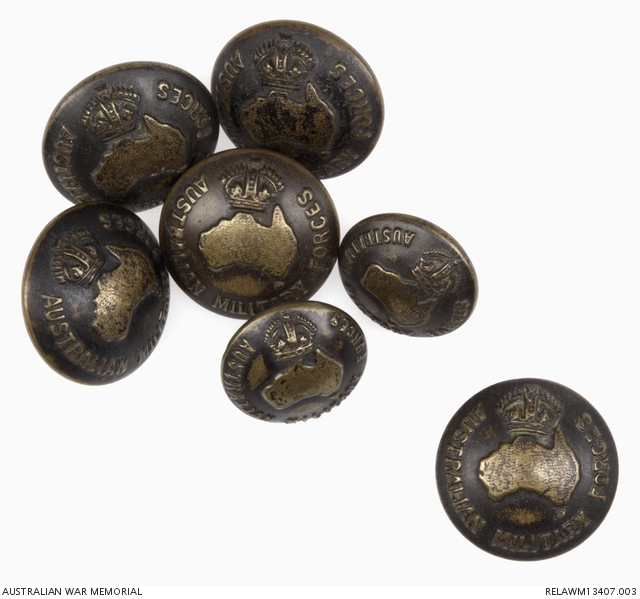 Seven oxidised brass buttons taken from an Australian Army service tunic. Two of the buttons are the smaller cuff buttons, the other five are from the front of the tunic.

Associated with the service of Sergeant Arthur Bernard, who was born in Londonderry, Ireland in December 1884.

During his youth in Ireland, he served for 18 months in the militia with the 6th Duke of Connaught's Rifles. After emigrating to Australia, he settled in Sydney and was working as a mechanical electrician when the First World War began.

Bernard enlisted for service with the second contingent of the Australian Naval and Military Expeditionary Force (ANMEF) on 7 December 1914. Upon enlistment, he was allocated the number 378 and the rank of private.

Bernard embarked with the second contingent from Sydney aboard SS Eastern on 25 January 1915. After arriving at Rabaul, his civilian trade saw him posted to the telephone exchange at Herbertshohe in mid February.

He was promoted to corporal in September and then sergeant in December 1915. He continued to work on the telephone exchange throughout 1916, before being granted a furlough late in the year. He embarked from Rabaul aboard SS Marsina on 1 January 1917 and returned to Sydney.

Bernard spent several months back in Sydney, before re-embarking for Rabaul on 17 March aboard SS Morinda. After arriving back in Rabaul, he returned to the telephone exchange. He continued to work there until February 1918, when he requested a return to Australia for discharge.

Bernard embarked from Rabaul for Sydney on 18 February. He was discharged from the ANMEF on 18 April 1918.