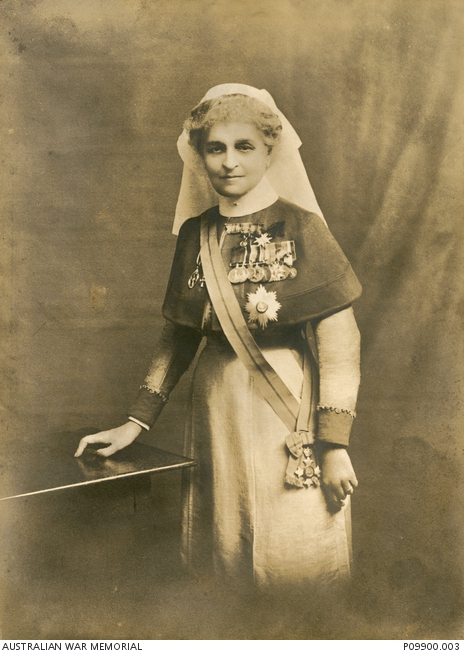 Studio portrait of Dame Emma Maud McCarthy GBE RRC. Born on 22 September 1859 at Paddington, Sydney, by 1891 she was in England and at age 28 she commenced nursing training. In 1894 she was promoted to Sister and in 1899 was one of the six sisters selected from the London Hospital by Princess Alexandra to go to South Africa as her own military nursing sisters. She received the Royal Red Cross (RRC) at this time. On return she was awarded a special decoration from Queen Alexandra and then assisted with the formation of the Queen Alexandra's Imperial Nursing Service. In 1903 she was promoted to matron, and appointed to several military hospitals. She was appointed Principal Matron of the War Office in 1910. At the outbreak of war she arrived in France in 1914 and in 1915 was appointed matron-in-chief of the British Expeditionary Force in France and Flanders. In 1917 she was appointed Dame Grand Cross of the Order of the British Empire (GBE), received a Bar to the RRC, the Florence Nightingale Medal, the Belgian Medaille de la Reine Elizabeth, and the French Légion d'honneur and Medaille des Epidémies. She was matron-in-chief, Territorial Army Nursing Service, from 1920 until her retirement in 1925. Dame Maud McCarthy died at her home at Chelsea, London, on 1 April 1949.