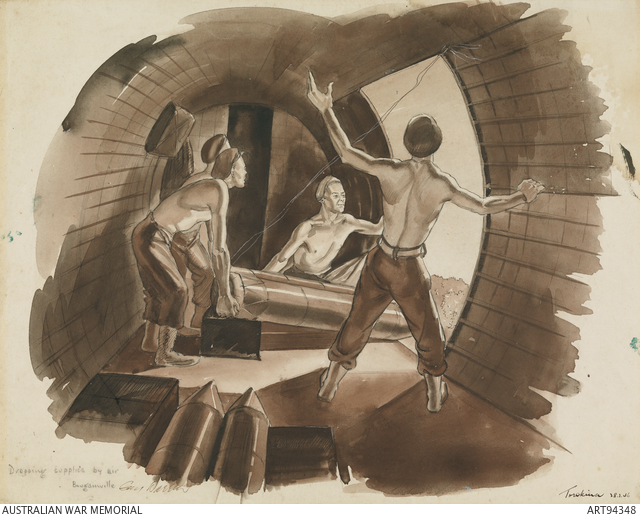 Four dispatchers about to drop supplies by air over a jungle clearing in Bougainville. Three crew members steady the container, called "storepedoes", in front of the open side door of the plane while they wait for the signal from the fourth to let it go. When the plane was coming over the specified target, the pilot would signal the dispatch crew with a light. None of the crew wear safety harnesses, and there were instances where some dispatchers followed the supplies out the door. This sketch was made shortly after the artist experienced a close call himself. He describes how the plane "fell into an air pocket and the left wing dropped just as I lifted and heaved the rear end of a large and heavy storepedo. As the plane tipped in the direction I was heaving I was thrown forward off balance. I tripped over the box and followed the storepedo out of the open door, luckily not all the way." (Source: Norbert Lynton and John McDonald, 'Searching for Gaia: the art of Guy Warren', Macmillan Art Publishing, Victoria, 2003, p.137)