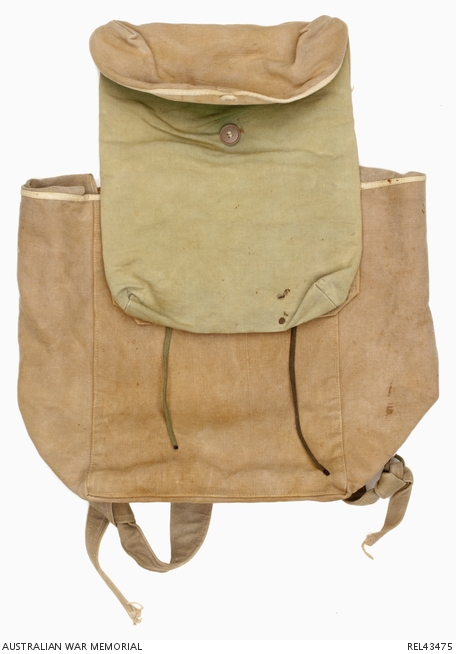 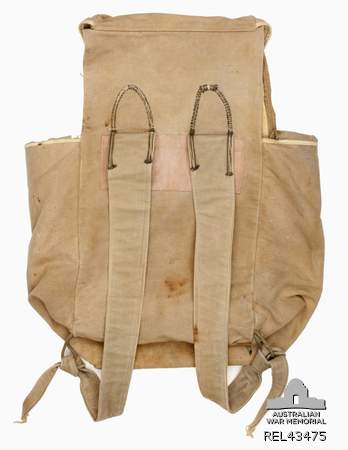 Locally made canvas haversack. It consists of a central compartment made from light brown canvas with fold-in weather flaps. This compartment is closed by a large external flap secured by tying together lengths of synthetic cord. The flap has a large external pocket of green canvas with a plastic button closure. The straps are of light brown canvas 60 mm wide tapering to 12 mm wide. The narrow end of each strap is passed through a loop of synthetic cord sewn to the bottom of the haversack and knotted. This is how the length of the straps can be adjusted. Lengths of synthetic cord have been machine sewn to the both the straps and the haversack along the joins as a means of reinforcement.

Peter Michael Cachia was born in Oxfordshire, England in 1940. He emigrated to Australia in 1962 and worked in a variety of jobs before enlisting in the Regular Army Special Reserve on 10 December 1963 at Brisbane. After initial training he was assigned to 1 Field Squadron, Royal Australian Engineers with the service number 1410862.

Cachia deployed to Sabah in northern Borneo with his unit from December 1964 until June 1965. Upon his return to Australia he was posted to 3 Field Troop, which deployed to Vietnam in September 1965. This unit was one of several Australian units attached to the US 173rd Airborne Brigade based at Bien Hoa.

From 8 to 14 January 1966, 3 Field Troop took part in Operation Crimp, whose objective was a series of underground bunkers believed to be in the Ho Bo Woods area of Cu Chi district in Binh Duong Province. Intelligence indicated that the tunnels housed the headquarters for the Communist committee that controlled all Viet Cong activity in the Capital Military District. Over 8000 allied troops took part in the operation.

A large complex of tunnels was uncovered by 1 Battalion Royal Australian Regiment, which was later discovered to cover approximately 56 square kilometres. It consisted of over 200 kilometres of tunnels in multiple levels, and included living, working and storage areas. Policy at the time was to destroy tunnels and bunkers, but the engineers of 3 Field Troop began searching them, capturing large quantities of weapons, food, equipment and documents. It was during this operation that Sapper Cachia acquired this haversack, which originally contained an aluminium lighter and a large quantity of documents and other printed matter. The printed matter was taken by army intelligence for analysis, and Cachia was allowed to keep the haversack and lighter. Following the Australian successes on Operation Crimp, American units throughout Vietnam received orders to clear tunnels before destroying them.

Cachia returned to Australia in September 1966, and was posted to 7 Field Squadron at Brisbane, Queensland until July 1967. After further training he was then posted to 2 Field Troop/11 Field Squadron, a joint Australian/British engineers unit. Cachia deployed to Malaysia with this unit from September 1967 until August 1969.

Upon his return to Australia, Cachia moved through a number of postings, including 22 Construction Squadron in Perth, a posting as an instructor at the School of Military Engineering in Liverpool, New South Wales, and postings with a number of engineering units around Sydney.

In March 1973 he was posted to the Papua New Guinea Defence Force Movements Unit. During this period Cachia transferred to the Royal Australian Corps of Transport, but remained in Papua New Guinea on his posting until April 1975. In August 1977 Cachia was posted to 9 Transport Squadron at Townsville, and the subsequent period of his service saw several postings across a variety of units in this region.

Peter Cachia was discharged from the Australian Army at Townsville in January 1984 with the rank of Sergeant.