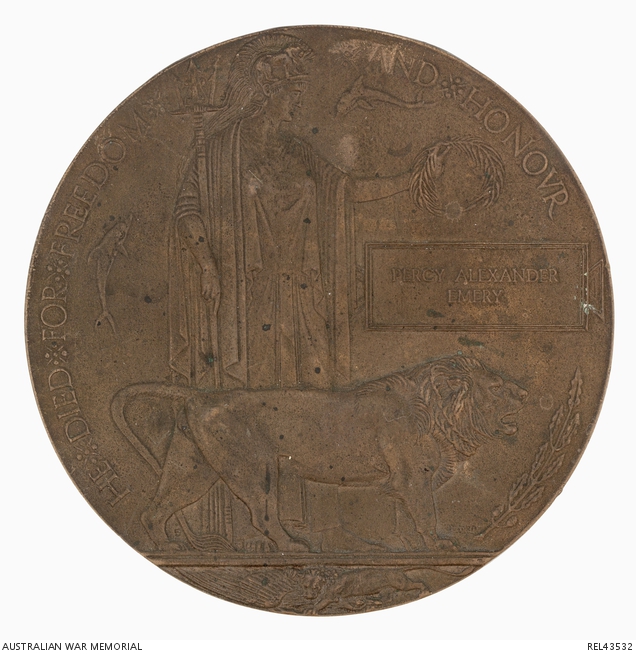 Bronze next of kin plaque, showing on the obverse, Britannia holding a laurel wreath, the British lion, dolphins, a spray of oak leaves and the words 'HE DIED FOR FREEDOM AND HONOUR' around the edge. Beneath the main figures, the British lion defeats the German eagle. The initials 'ECP', for the designer Edward Carter Preston appear above the lion's right forepaw. A raised rectangle above the lion's head bears the name 'PERCY ALEXANDER EMERY'. A checker's mark, '5', is impressed between the lion's rear left paw and tail.

Percy Alexander Emery (also known as Alexander Percival Emery) was born in Hobart, Tasmania in 1880. During the 1890s he served as a volunteer in the Tasmanian Defence Force. He served twice in the Boer War, as private, number 153, with the 2nd Tasmanian Imperial Bushmen, and as corporal, number 263, with the 8th Battalion, Australian Commonwealth Horse.

Emery subsequently served for 3 years and a half years in the Royal Navy, and for a further 5 years with the Royal Naval Reserve. In 1915 he was working as a carpenter in Sydney when he joined the Home Defence Military Provost Staff. His services no longer required, he was discharged on 14 December. The following day he enlisted in the AIF. Emery sailed for overseas service on 20 January 1916, aboard HMAT A54 Runic, as a signaller, number 5761, with the 14th Reinforcements to the 1st Division Signal Company. His wife and two young children returned to Hobart.

Emery arrived at Alexandria in Egypt on 27 February. Although nominally held as part of the signal company he appears never to have served in that capacity. He was posted first to 2 Australian General Hospital and then to the Post Office Corps at Port Tawfick. In June he transferred to work at 1 Australian Auxiliary Hospital at Harefield, England, possibly still undertaking postal work. At the end of July 1918 he contracted influenza. Suffering from lingering bronchitis he was admitted to 3 Australian Auxiliary Hospital at Dartford, on 6 October. Emery then developed acute gastritis. He was transferred to King George's Hospital in London, but his condition worsened. He died there at 4.45 pm on 19 December and was buried in the Brookwood Military Cemetery.

This commemorative plaque was sent to Emery's widow, Saidee Anne, in February 1923.