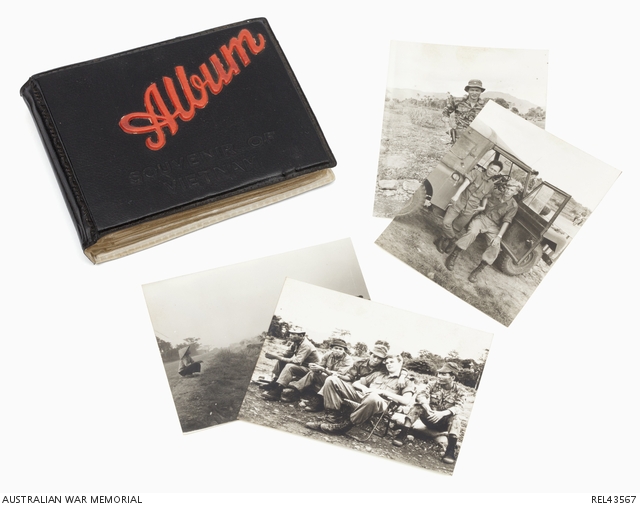 Rectangular landscape format photograph album for housing 3 1/2 inch x 2 3/4 inch (88 mm x 67 mm) prints. The album is bound in blue polyvinyl chloride (PVC), with the front heat stamped. The word 'Album' is in red vinyl and sits proud of the surface. There are 19 clear vinyl sleeves within, most containing snapshots taken in Vietnam, mainly in the Phuoc Tuy province. Apart from five or six landscape shots, the remainder are of Vietnamese civilians and South Vietnamese soldiers, and may include O'Shea in some shots. None are identified.

Over the space of a year, 7 RAR were involved in 26 major operations, patrolling and resettlement activities in the Xa Bang and Nui Dat areas, as well as the Xuyen Moc Operation, Operation Ballarat and the subsequent Battle of Suoi Chau Pha (August 1967) and Operation Santa Fe (May Tao Zone, October 1967). In December 1967 1 ATF was expanded when 3 RAR and elements of the Armoured Corps joined 7 RAR in Phouc Tuy. The battalion's final major operation was support of Operation Coburg during January to March 1968, along the Bien Hoa -Long Khanh border during the Tet Offensive. It was during this operation that Private O'Shea was photographed helping to secure a wounded Viet Cong defector after an ambush in February during Operation Coburg. O'Shea appears to have had a degree of affinity with the South Vietnamese troops serving with his unit, as one of his souvenir photograph albums contains a high percentage of images depicting them in casual poses at 1 ATF.