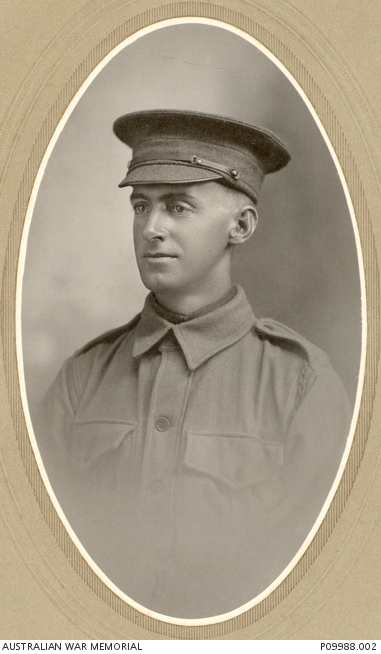 Studio portrait of 717 Private (Pte) Thomas Kevin Martin Cahill, 37th Battalion. An amalgamator from Canterbury, Vic, prior to enlistment, Cahill embarked as a Lance Corporal with B Company from Melbourne aboard HMAT Persic (A34) on 3 June 1916. He transferred to the 10th Light Trench Mortar Battery and rose to the rank of Sergeant before transferring to the 39th Battalion. Cahill was promoted to Lieutenant (Lt) in February 1918 and was killed in action in France on 30 August 1918, aged 34. Lt Cahill was one of four brothers who enlisted in the AIF. 730 Pte Francis Cahill died of illness in Melbourne on 22 October 1915. 2812 Pte Richard Cahill died of wounds in France on 24 July 1916. 3324 Lt Martin Cahill was awarded a Military Cross (MC) and returned to Australia in December 1918.