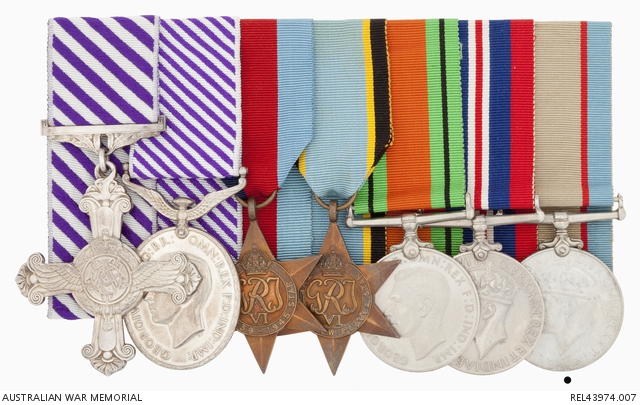 Alexander William Wales was born was born in Melbourne, Victoria in 1921. He was working with Dunlop Rubber when he enlisted in the RAAF on 15 July 1940. After initial training at Narrandera, New South Wales, he left Australia for Canada on 13 June 1941. After several months of further training he qualified as a pilot in September 1941. He left for England the following month.

Wales completed a number of training courses in England, and was eventually posted to 460 Squadron at Binbrook in August 1942. He commenced operations almost immediately, which included bombing operations on cities such as Mainz, Kassell and Bremen, and the dropping of sea mines around coastal areas of France and Germany.

In January 1943, he became one of the first pilots in 460 Squadron to complete his first operational tour of 22 missions. For his performance during this period, Wales was awarded the Distinguished Flying Medal, which was gazetted in April 1943.

The next 10 months consisted of more training and testing of aircraft. In November 1943 he returned to 460 Squadron for a second operational tour, and became one of squadron's three flight commanders.

Of the 22 missions flown by Wales on his second tour, Berlin was the target on 14 of them. This included a raid on 29 December 1943 when he flew G for George instead of his usual aircraft, R for Robert.

On one occasion during his second tour Wales had difficulty handling his aircraft after takeoff, to the point that he deemed it unfit to continue on the operation. He ordered the bomb load dropped into the sea and returned to base. The ground crew could find no fault with the aircraft, and Wales feared that his colleagues would think he had 'squibbed out'. The following day however, further investigations found that one of the tail rudders was half filled with water.

During this period Wales also sustained a back injury from a fall in a hangar while testing aircraft, but did not report it; 'I didn't put it on record, no. We were going out on a trip that night and I wasn't going to let anybody take my crew anywhere.' This injury caused him considerable pain later in life.

Wales' second operational tour ended on 18 March 1944. In his history of 460 Squadron 'Strike and Return', Peter Firkins describes how on his farewell flight Wales treated the squadron to 'one of the most breathtaking exhibitions of flying ever seen in a Lancaster during which the tail wheel touched the ground as they came in on one of their "strafes" to the station.'

Base commander Group Captain Hughie Edwards VC offered Wales a position as a test pilot but he refused, stating that he wanted to stay with his crew. Wales was then posted to the United States for the purpose of ferrying Liberators to Australia, but upon arrival learned that the operation had not been finalised, and so had to return to Australia by ship. On his return Wales was posted to a training role at Tocumwal in New South Wales. During this period he was awarded the Distinguished Flying Cross for the performance of his duties during his second operational tour in Europe.

He was eventually discharged from the RAAF in October 1944 at his own request and joined the flying staff of Australian National Airways. In 1956 he transferred to Cathay Pacific, with whom he flew until his retirement.