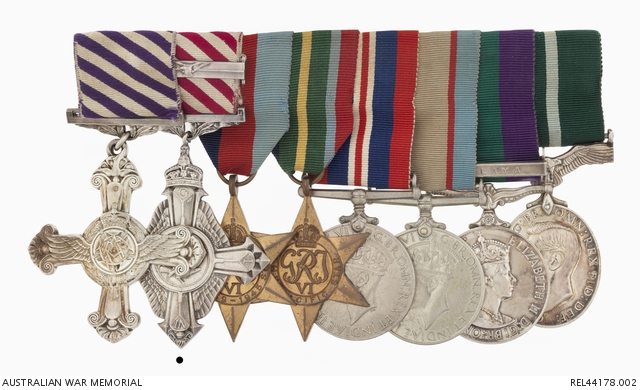 Kenneth Victor Robertson was born at Brighton, Victoria in 1915. He already had experience as a pilot when he enlisted in the RAAF as an air cadet on 5 February 1940 with the service number 250752. He began flying the following day, and was flying solo within a week.

Because of the urgent need to train large numbers of pilots, Robertson’s entire flying class were designated to become flying instructors, and he was posted as an instructor to several flight schools through 1940 and 1941, earning promotion to Pilot Officer and Flying Officer during this period.

In April 1942 he was promoted to Flight Lieutenant. The following month Robertson began his career as a test pilot at Mascot, New South Wales when he was engaged testing newly arrived American aircraft such as the P-39 Airacobra.

Commencing in June 1942, Robertson’s test pilot duties included the testing of the early ‘g’-suit designed by Professor Frank Cotton. This suit was an attempt to overcome the effects of gravity experienced by pilots during flying manoeuvres, and the tests in which Robertson participated made in important contribution to its development. After testing in a centrifuge at the University of Sydney, the first flights in this suit were taken in a Hurricane, the only aircraft of this type ever delivered to Australia. Robertson continued to test the suit across several different types of aircraft under operational conditions, such as Spitfires and Kittyhawks. His test pilot duties during this period also included the testing of the CA-14, a variant of the CAC Boomerang fighter aircraft fitted with a turbo-supercharged engine. Only one such aircraft was ever built, with the number A46-1001. Robertson crashed landed this aircraft at Laverton, Victoria on 27 May 1943.

For his important contribution as a test pilot, particularly his role in the ‘g’-suit research, Robertson was awarded the Air Force Cross (AFC) in September 1943.

The citation for the AFC reads: ‘Flight Lieutenant ROBERTSON has carried out the flight trials of a device to improve the fighting qualities of fighter aircraft by extending the factor of human endurance, and has been responsible for its gradual refinement until it has reached a form suitable for operational use.

Throughout these tests Flight Lieutenant ROBERTSON has submitted himself, without hesitation, to strains which are the limit of human endurance, thereby displaying outstanding courage and devotion to duty.’

Robertson was posted to 452 Squadron at Richmond, New South Wales in November 1943, which moved to Darwin, Northern Territory in January 1944. For most of 1944 he was based with his squadron at Batchelor, where he flew Spitfires in defence of Darwin. He was promoted to Squadron Leader in July.

He returned to his role as a test pilot at Laverton in October 1944 and did further work through 1945. This period included the testing of an American pattern ‘g’-suit, and experiments involving different types of aircraft in glider operations.

Robertson’s duties also included the testing of newly received aircraft, and on 18 July 1945, he became the first Australian pilot to fly Mustang A68-648, the aircraft which is now in the collection of the Australian War Memorial.

Throughout 1946 Robertson was posted in England attending the Empire Test Pilots School. This coincided with the growing military importance of rotary-wing aircraft. Consequently in April 1947 Robertson was sent to the Airborne Forces Experimental Establishment to learn to fly helicopters. Robertson learned on the Sikorsky R-4 (in Britain known as the Hoverfly I) which was the first helicopter in service with the RAF. He was then sent to the United States to Sikorsky Aircraft at Bridgeport, Connecticut, through June and July 1947, where he learned to fly the Sikorsky S-51 and to take delivery of this aircraft for the RAAF. Robertson returned to Melbourne in September. The front page of ‘The Age’ newspaper of 10 October, 1947 records that at Laverton on 9 October, he was at the controls of the first helicopter to fly in Australia. It should be noted that this flight is not recorded in Robertson’s log book. This oversight may have contributed to his error in later annotating a flight in November as being the first Australian helicopter flight.

Robertson’s role as a test pilot continued. In June 1948 he flew the CA-15, a prototype Australian fighter aircraft which drew some of its design inspiration from the Mustang. Through March and April 1950 he piloted the experimental De Havilland glider, A57-1 – the GLAS II suction-wing glider - in a series of tests. For his continued performance in this test pilot role Robertson was awarded a bar to his AFC in June 1951.

The citation for the bar to the AFC reads: ‘Squadron Leader ROBERTSON has been continuously engaged on flying duties since the completion of his training in 1940. He was first associated with the test flying of aircraft at Test and Ferry Flight in 1942, and for this work he was awarded the Air Force Cross in 1943.

Since that time, he has continued to give outstanding service in this particular field of flying, and has accumulated more than three thousand hours flying on fifty-five different types of aircraft. In 1946, Squadron Leader ROBERTSON successfully completed the Empire Test Pilots’ Course in the United Kingdom. This officer was the first pilot in the Royal Australian Air Force to successfully complete a course of flying training on the Helicopter, in which he has completed more than two hundred and seventy five hours of valuable flying.

Throughout the whole of his service, Squadron Leader ROBERTSON’S flying has been characterised by an unusually consistent degree of skill, accuracy and careful analysis. Apart from the general contribution he has made to flying efficiency, he has undertaken as required a number of test flights known to have been attended with much more than normal risks; the most recent example of this being the flying of the experimental suction wing-glider.

Squadron Leader ROBERTSON has achieved an almost unique record of dependable developmental flying over a complete range of conditions and types of testing. He has set an outstanding example in maintain a high degree of exceptional flying over a long period.’

He was posted to the Aircraft Research and Development Unit at Laverton in November 1951. In February the following year this posting took Robertson to the Anglo-Australian Joint Project based at Woomera, South Australia. His role in this project is not clear, but it is likely that he was piloting aircraft for the dropping and recovery of various types of experimental munitions.

On 1 January 1952, Robertson’s wife went into labour with their first child, so the RAAF allowed him to fly a Lincoln bomber from Woomera back to Laverton to see her. Their son was born on 2 January. Robertson remained with his family until 22 January, when he returned to Woomera in the same aircraft.

Robertson attended Staff College at Point Cook in the latter half of 1953, and in January 1954 was promoted to Wing Commander.

In January 1956 he left for Malaya to take up a posting as commanding officer of 1 Squadron, who had been based at Tengah since July 1950. Robertson’s log book records that on 31 January 1956 he flew the first of 103 operations in Lincoln bombers with this unit. For the performance of his duties while serving with 1 Squadron he was awarded the Distinguished Flying Cross in 1958.

Robertson returned to Australia in July 1958, and after several postings was sent to the United States to attend the US Army Aviation School at Fort Rucker, Alabama to become an instructor in rotary wing aircraft. Upon completion of the course he received a letter of commendation from Colonel Delk Oden, Assistant Commandant of the Aviation School who stated; ‘[t]he resourcefulness and enthusiasm you have displayed while accomplishing the tasks set forth in this course have earned for you the admiration and respect of all concerned. Your co-operation with instructors and fellow students has made your stay with this school most welcome and reflects great credit on you and your government.’ His period in the United States included familiarization with various types of helicopter at Bell, Sikorsky and Kaman. He returned to Australia in November of the same year.

At the start of December 1960 he was posted to command the newly-raised 16 Army Light Aircraft Squadron at Amberley. This squadron was equipped with Cessna 180 light aircraft and Bell G-2 Sioux helicopters, and its establishment is a key date in the emergence of modern Australian Army aviation. Robertson remained with this squadron for several years, instructing army pilots and testing newly received aircraft.

Robertson was posted to Headquarters Support Command in Melbourne in 1964, and received the Air Efficiency Award shortly afterward for his service. During his posting at Melbourne he continued working as an instructor.

Robertson retired from the RAAF in March 1965 on his fiftieth birthday, and was promoted to the honorary rank of Group Captain.

He remained a keen pilot in civilian life and continued to work as a flight instructor, mainly in helicopters.

On 17 December 1967, he was the pilot of a helicopter which took part in the initial search for Prime Minister Harold Holt in the ocean off Portsea, Victoria. Robertson’s logbook records that his passenger that day was Inspector Lawrence Newell, the Melbourne police inspector in charge of co-ordinating the entire search. Robertson also flew more search sorties in the area over the following three days.