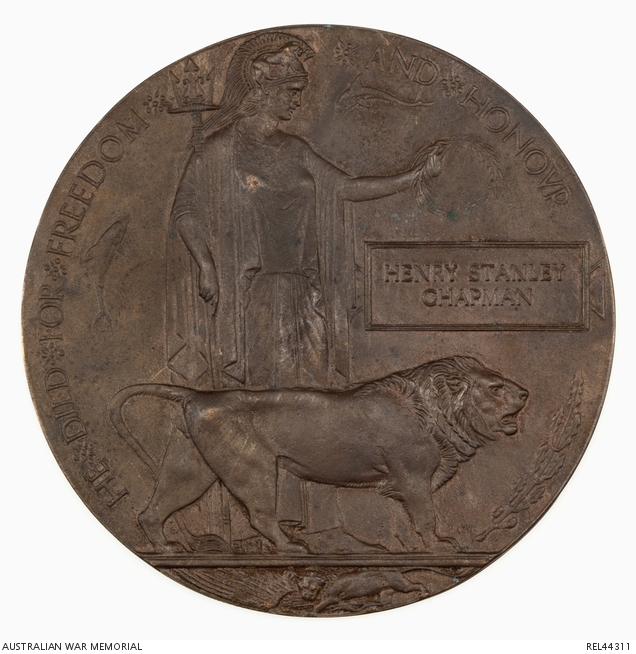 Bronze next of kin plaque, showing on the obverse, Britannia holding a laurel wreath, the British lion, dolphins, a spray of oak leaves and the words 'HE DIED FOR FREEDOM AND HONOUR' around the edge. Beneath the main figures, the British lion defeats the German eagle. The initials 'ECP', for the designer Edward Carter Preston appear above the lion's right forepaw. A raised rectangle above the lion's head bears the name 'HENRY STANLEY CHAPMAN'. Plaque is contained in original cardboard packaging.

Born in Armidale, New South Wales, Henry Stanley Chapman was employed as a telegraph operator with the Government Railways when he enlisted in the AIF in Sydney on 27 August 1914, aged 22. After initial training he was posted a private, service number 1311, to G Company, 3rd Battalion. The unit embarked from Sydney on 20 October, aboard HMAT A13 Euripides.

After training in Egypt 3rd Battalion landed at Gallipoli on the afternoon of 25 April 1915. Chapman survived the entire campaign without illness or injury. He was promoted corporal on 25 October. Back in Egypt Chapman was promoted 2nd lieutenant in March 1916, shortly before his battalion left for France for service on the Western Front. He was promoted lieutenant on 29 June.

Chapman was killed during the battle of Pozieres, on 25 July. The battalion's War Diary from the day recorded: '0815 Lieut H.S. Chapman was pinned down by heavy timber, the result of a shell, and rendered unconscious, a few minutes later he was buried and killed by another shell.' More that half the battalion's men were killed or wounded during the battle. Chapman's body was not recovered for burial. His name is commemorated on the Villers-Bretonneux Memorial.

This memorial plaque was sent to his father, Frederick Chapman, in January 1923.