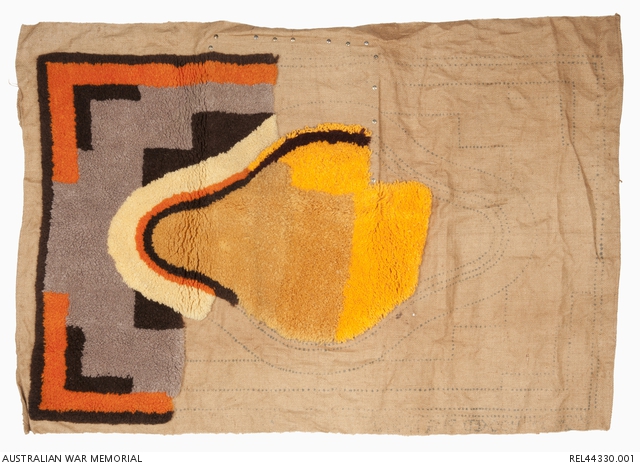 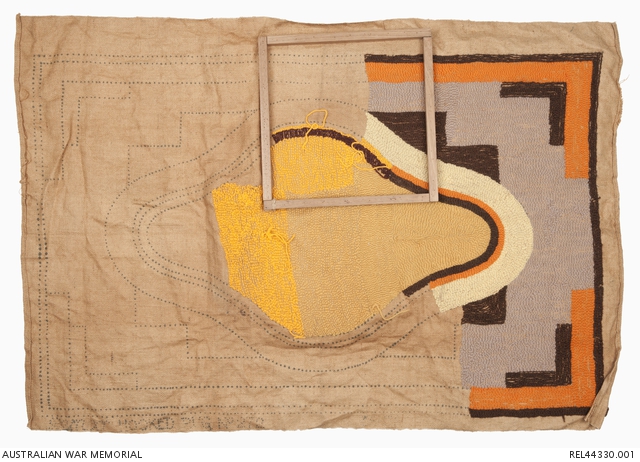 Partially completed woollen punch hooked rug. The left hand side of the rug has been completed in shades of yellow, brown and orange wool, working to a symmetrical pattern that is dotted in ink on the back of the hessian (but which can be seen through to the front). The design consists of rectangular frames around an oval type centre pattern. The design is worked by punching and hooking the wool through the hessian, with the area being worked and held firm by a wooden frame onto which the hessian is stretched and tacked with brass tacks. Stamped in ink on the bottom back of the rug is '[illegible] HOOKED RUG No 272'.

Leslie Neil Cameron was born on 23 January 1920 at Sydney, New South Wales. He enlisted at Paddington, on 31 March 1941 as a signalman with 2 Company, 8 Division Signals. He had previously undertaken three months training with the Royal Australian Artillery.

Cameron was listed as missing in Malaya in February 1942 and spent some time at Changi prison camp before being sent to Kobe, Japan, to work at the dockyards, being listed as a prisoner of war in Osaka from July 1943.

On 26 September 1945, he was recovered from the Japanese and embarked from Manilla for Sydney on 5 October, arriving on 13 October. On his return, Cameron spent time at Yaralla Repatriation Hospital at Concord, Sydney, where he worked on the rug as a form of post-war rehabilitation. Cameron was discharged on compassionate grounds at his own request on 7 December.