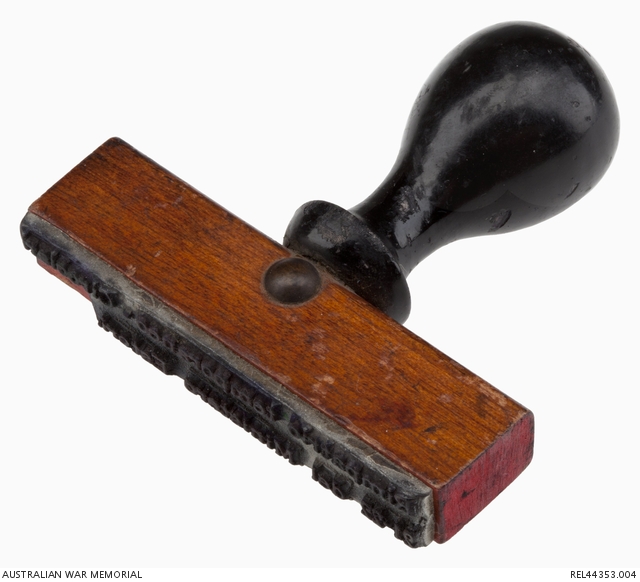 Consulate stamp bearing the words 'Rimpatrio Temporaneo - Circolari, 21-22 del Ministero Esteri' (Temporary Repatriation Circulars - 21-22, Ministry of Foreign Affairs) in reverse on a rubber block cemented to a varnished wooden block, fitted with a black varnished wooden handle. A copper rivet secures the handle to the block, which is also glued.

One of a set of eleven consular authority and receipt stamps confiscated by police from the Italian Vice-Consulate in Currie Street, Adelaide, South Australia, on 11 June 1940, the day after Italy declared war and a few days after the end of the Dunkirk evacuations. Australian authorities swooped on known and suspected Italian fascists throughout Australia, often interning fascist and anti-fascist indiscriminately.

The Adelaide Advertiser for Thursday 13 June 1940 reported: 'Callers at the Italian Vice-Consulate ... yesterday found the office locked and a large cardboard notice tacked on the door bearing the followings words in ink: "Da Oggi in Poi Consolato Chiuso", meaning that the consulate had closed from that day until further notice. The Italian Vice-Consul (Signor Felice Rando) who lives at Toorak Gardens, said last night that he was awaiting instructions as to his future movements.
"Since I have been in South Australia I have received the utmost courtesy from all sections of the community," said Signor Rando. "The authorities have treated me with the same consideration since my country declared war on the Allies." '

Italian consuls in Australia had, since the late 1920s, kept a close eye on the political affiliations and activism of many Italian immigrants living in Australia, compiling files which reported on their activities and highlighted any anti-fascist leanings, or even a failure to declare support for fascism. At times, co-operation was freely given by Australian authorities, especially if the threat of active communism was invoked. These reports were used in Italy to place pressure on family members still in Italy. The 1940 Australian raids and arrests continued for a number of months. The raid on the Vice-Consulate in Adelaide netted useful lists as well as a range of nationalistic and fascist literature and memorabilia.