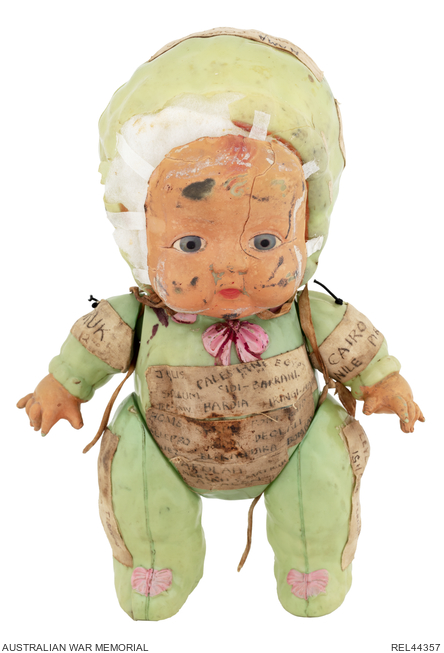 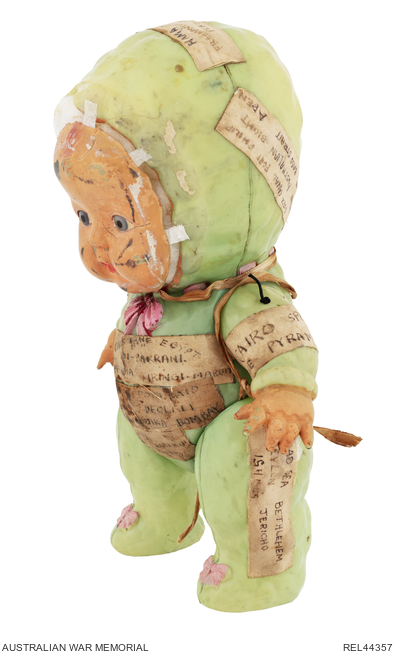 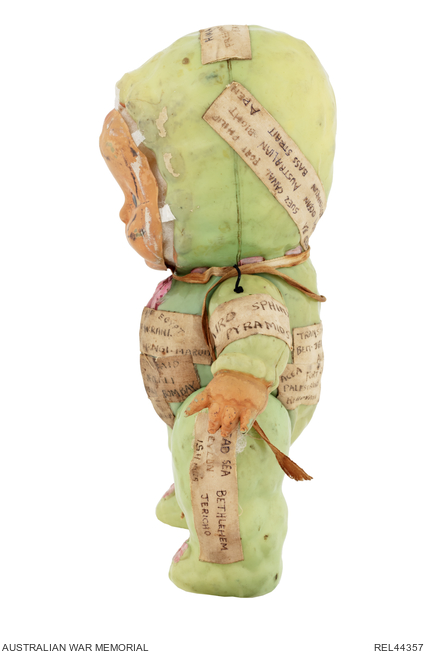 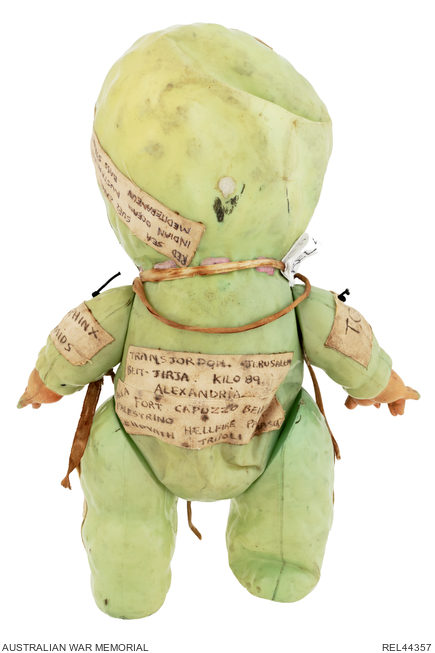 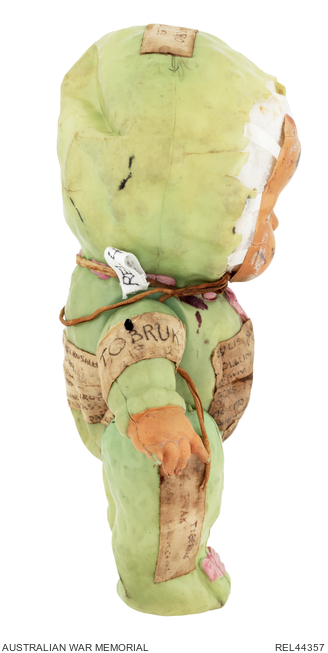 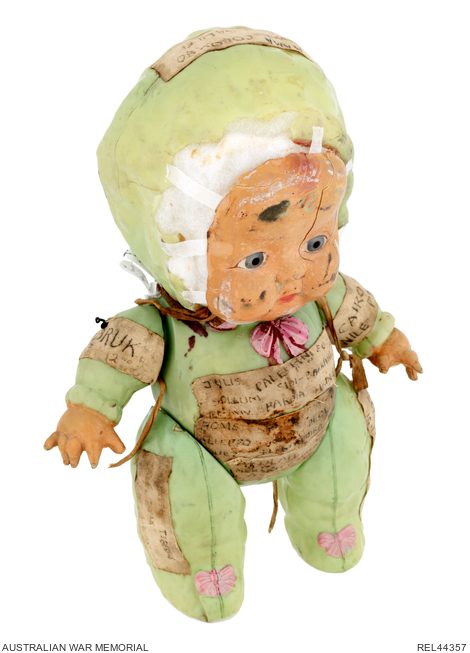 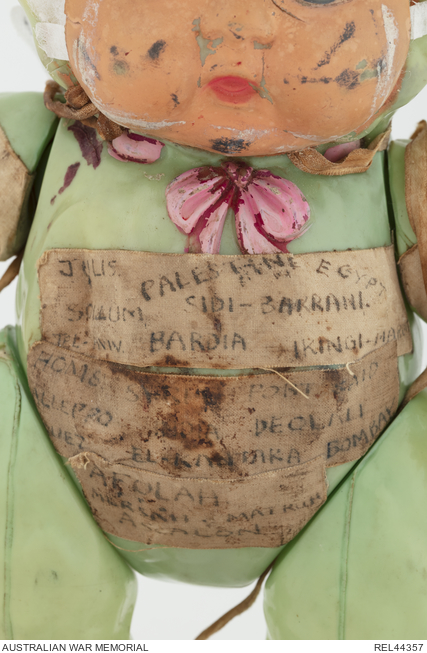 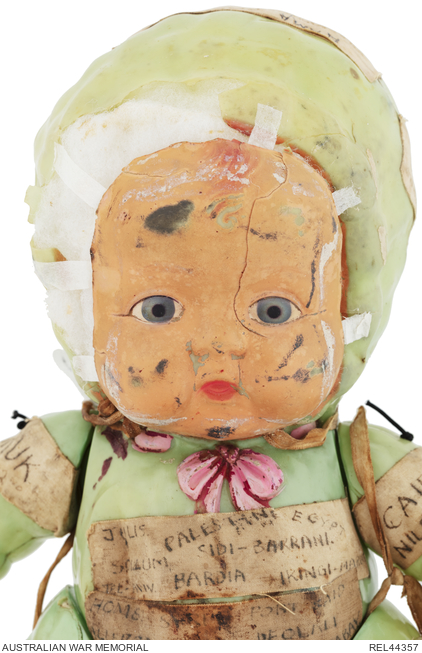 Green blown-celluloid baby doll with elasticised jointed arms and legs. Depicted in a green wool hooded jumpsuit with moulded bows on each foot and at the neck; there is also a laced ribbon pattern moulded around the neck. The bows and lacing are painted pink, while the hands and face are painted in skin colour. The doll features painted mouth and eyes, with a pink hair curl at the forehead. It is likely that the elastic has been replaced on the arms, as the elastic has been pushed through to the exterior and knotted. A long pink satin ribbon is tied round the neck and has discoloured with age. The makers's trademark - a cross within a circle - and the words 'Made in Japan Pat. 585' are moulded into the upper back.

The doll's face has detached from the front of the head with some splitting and distortion evident. A variety of foam has been stuffed into the head to maintain shape but has pushed out the extremities of the torn section. There is a sizeable groove pushed into the rear of the head. The face has been reattached using lengths of contemporary Second World War cotton sticking plaster, which has also been attached to the crown of the head, left side of the head, the rear of the back, around each arm and down the sides of each leg. Written in ink on each plaster are place names associated with Sergeant Bowen's Second World War service. There is evidence some have been over-inked at a later point.

Late 1930s Japanese celluloid doll, commonly available in Australian stores prior to the Second World War, relating to the service of Thomas Arthur Bowden. Bowden was born at Stawell, Vic on 17 April 1913. He was an unmarried spray painter living at Geelong when he enlisted on 31 May 1940. He was assigned the service number VX20784 and four days later was posted to 2/5 Field Ambulance as the unit was being formed at Puckapunyal. He embarked for overseas service on 20 October with his unit aboard the converted liner, RMS Mauretania, bound for the Middle East. There, on 21 December, he was appointed to the rank of lance corporal and graded as a nursing orderly while his unit was training in Palestine. In early January, 2/5 Field Ambulance was transferred from 7 Division (21 Brigade) to 6 Division (18 Brigade). Bowden was detached to 4 Australian General Hospital from 26 April to 8 June and a week later detached to 2/11 Field Ambulance for three days; then to the Tobruk sub-area for two weeks, before returning to his unit. On 29 December 1941 he was promoted to acting corporal, having seen action at Tobruk and in Syria.

With the entry of Japan into the war, 2/5 Field Ambulance was rushed back to Australia, via Columbia, departing Egypt on 11 February 1942. He arrived at Adelaide on board the transport MV Nieuw Amsterdam on 27 March. Bowden reverted to the rank of lance corporal prior to embarkation, but was promoted again to acting on 26 April; he was finally confirmed as a corporal on 7 August.

The unit had been trained in preparation for a move to Milne Bay, where they arrived on 17 August, serving there until 9 March 1943, when they moved back to Townsville. Bowden was promoted to sergeant in late January 1944 but had spent Christmas in hospital with malaria, and suffered a relapse in May and June; he had, however, married on 7 April.

His unit moved to the Ravenshoe jungle training centre, where they trained intensively in jungle fighting and river crossing methods, and were transferred to New Guinea, arriving at Port Moresby on 20 August. Early in January 1944, they were flown to Dumpu, Ramu Valley, where they relieved 2/4 Field Ambulance during the fighting for Shaggy Ridge, but Sergeant Bowden missed this movement, as he was in hospital with gastritis. He rejoined his unit at Shaggy Ridge on 19 March, where they served until the middle of May, when they were flown to Lae and embarked aboard HMT Duntroon for return to Australia, landing at Townsville on 20 May. They spent Christmas in Australia, taking leave and undergoing further training, before joining the fighting again, this time in the landings at Morotai and later at Balikpapan. Throughout this last year, Bowden suffered repeated bouts of fever and malaria, but always returned to his unit. He received early discharge for long service on 23 August and returned to Australia in early September. His unit was disbanded on the 13 October 1945.

This celluloid doll, made in Japan in the late 1930s by Marugane and bearing their trademark of a cross within a circle, was readily available in Australian shops prior to the war. Indeed, Marugane was one of three major bulk suppliers to the Australian trade, especially Woolworths; the other two makers being Royal and Sekiguchi (see 'Celluloid Dolls of the World' by Marjory Fainges). It is thus most likely this doll was brought with the unit from Australia to the Middle East. Given the fragility of blown celluloid, it is not surprising that the hollow head was soon damaged, resulting in ongoing repairs made with hospital sticking plaster, which formed the basis for a list of places the unit served in whilst serving in the Middle East. The lack of Pacific place names suggests it was not taken to the deployments to Milne Bay, New Guinea or Morotai.