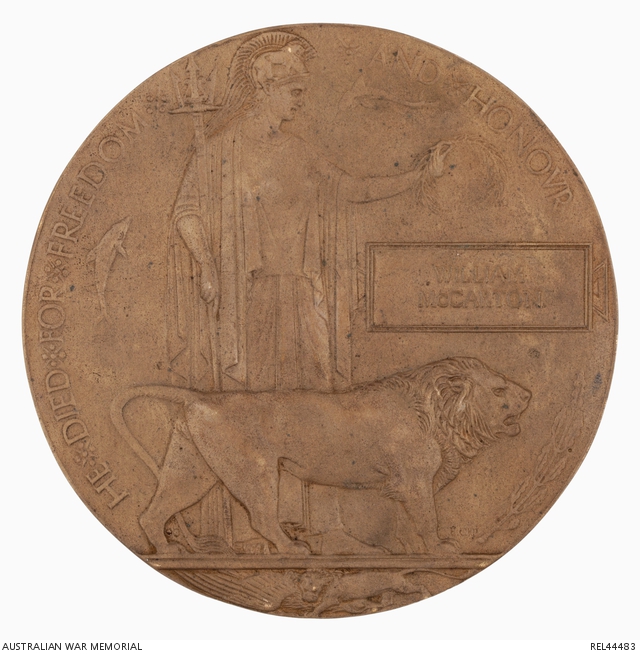 Bronze next of kin plaque, showing on the obverse, Britannia holding a laurel wreath, the British lion, dolphins, a spray of oak leaves and the words 'HE DIED FOR FREEDOM AND HONOUR' around the edge. Beneath the main figures, the British lion defeats the German eagle. The initials 'ECP', for the designer Edward Carter Preston appear above the lion's right forepaw. A raised rectangle above the lion's head bears the name 'WILLIAM McCARTON'. An impressed 'W' on the reverse is the mark manufacturing foundry, the Royal Arsenal at Woolwich. Plaque is contained in original cardboard packaging.

Born in Anderston, Glasgow, Scotland, William 'Scotty', a married seaman with two children, and with four and a half years service in the Royal Scots Fusiliers, was in Tasmania when war was declared and enlisted at Claremont on 9 December 1914. After basic training he was posted a private, service number 1630, to the 3rd Reinforcements for 12th. Battalion, embarking from Melbourne aboard the transport HMAT 'Runic' on 19 February 1915, and landing at Gallipoli in early May 1915. He served with his unit until the end of the campaign. After evacuation his unit underwent further training in Egypt. McCarton was transferred to 3rd Brigade Machine Gun Company as a Driver on 13 March 1916, two weeks before moving to France.

During 1916 McCarton was absent without leave on three occasions, undergoing a court martial in October and being sentenced to 40 days field punishment. After leave in England in early 1917, McCarton returned to his unit a week late, probably after visiting his wife and children in Glasgow, again incurring a court martial and punishment.

Mc Carton was mortally wounded near Glencorse Wood 20 September 1917, during the third battle of Ypres. Listed as missing, a Court of Enquiry in June 1918 upgraded his status 'killed in action'. During the enquiry, details emerged of the circumstances of McCarton's death. His Machine Gun team was led by 811 Corporal Keith St Clair Gale who stated that 'on the morning of 20 September 1917 we were proceeding through Glencorse Wood in single file. As we reached the edge of the wood, I heard someone cry out and looking round saw that Pte McCarton had been wounded. Pte Jones who was bringing up the rear relieved McCarton of the ammunition which he was carrying.'

Jones added: 'I saw Pte McCarton wounded by shell fire. He was hit through both thighs badly. I relieved him of the ammunition he was carrying and called to stretcher bearers who were close by to attend to him; I then proceeded forward with my gun crew. Pte McCarton was unable to walk and I have not seen him since.' Jones later added in a letter to the Red Cross: 'He was about 10 yards in front of me and a shell burst close to him. ... He was conscious and said to me 'I am knocked.' I don't know what became of him but the barrage was very heavy and if he was not moved immediately he would have been blown to pieces. The wounds were very severe in my opinion.' Jones also thought the stretcher bearers may not have heard his call for assistance. Lieutenant Bethune of 3rd Machine Gun Company noted in his response to Scottish Red Cross enquiries about McCarton that 'We had a very hot time on this day.'

William McCarton has no known grave and is commemorated on the Ypres Memorial at Menin Gate. He was 30 years old.

This commemorative plaque was sent to his widow, Agnes, in November 1922.