Not titled [portrait of an American Corporal in the Technical Division] 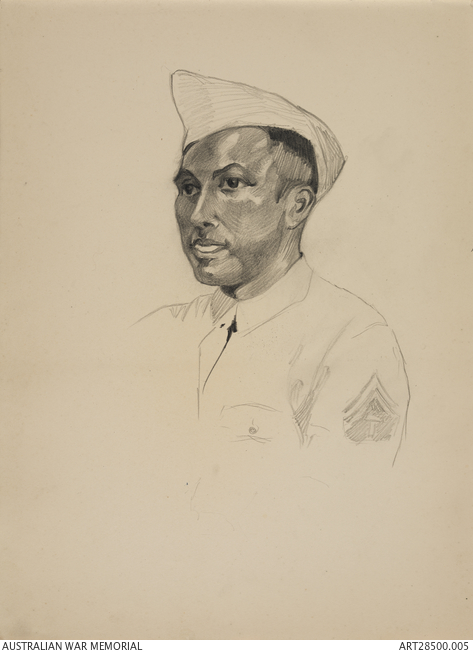 Portrait of an American sailor of the US Marine Corps wearing full uniform including cap and tunic. Arthur Gardener changed his name from Baumgarten after he migrated to Australia at the age of 30 on the 8th of March 1938, landing at Fremantle. "I was prompted to this decision by economic and political reasons, seeing no future for me and my wife in fascistic Austria under Schuschnig's government" he wrote. In Australia, at the age of 58, Private Arthur Gardener, assisted in the efforts of the Second World War on the home front in the 3rd Australian Employment Coy (N303400). This sketch belongs to an artist sketch book contains portrait and figure studies from the American Red Cross Club, Sydney, 1943. The works within in this sketchbook were done while Gardener was working as a picket at Mascot Unit Headquarters in Sydney. 'Whilst at camp in Mascot, [Gardener] preferred to spend his evenings, when not on picket duty, at the American Club, where painting and drawing classes had been organised.' This sketch book is comprised of 28 leaflets, 9 loose leaflets and 37 compositions, with hard grey cover and brown binding tape.