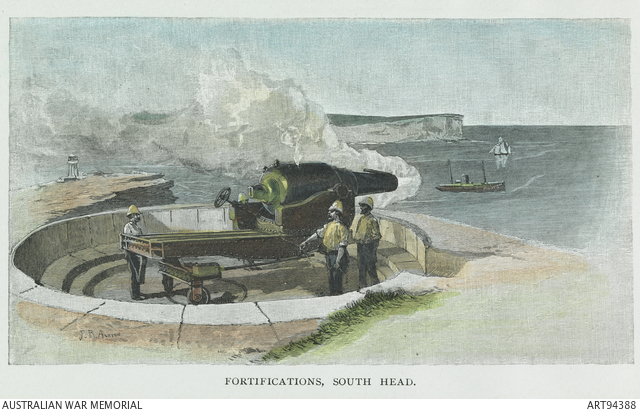 One of two drawings by Julian Ashton commissioned for 'the Picturesque Atlas of Australasia' (Volume II, p71) to illustrate the fortifications at South Head and the 25-ton gun at Middle Head, Sydney, respectively. The writer described them as '....the greatest fortification of Sydney. The gun carriages are placed in shallow, circular wells, the rock is caverned with magazines, and the powerful guns sweep all the water's face in front! To this point come artillery, professional and volunteer, to practice marksmanship, and to learn with accuracy the distance of any part that could be occupied by invading foe...'. Ashton was among the leading colonial artists to be employed by the Picturesque Atlas Publishing Company to work on sketches, in several colonies, of landscapes, figures and buildings for the ' Picturesque Atlas of Australasia'. Other Australian artists included W. Macleod; A.H. Fullwood; G.R. Ashton; W.C. Piguenit; A. Collingridge ; L. Buvelot and T. Roberts.

The ' Picturesque Atlas of Australasia' of 1886 was an attempt to describe Australia as it was at that time using words and pictures. It was edited by Andrew Garran (1825 - 1901) and included writing by leading politicians, academics and writers illustrated with over 700 images. It was the enterprise of an American art publishing company Picturesque Atlas Publishing Co. Ltd who had been responsible for the successful production of ' Picturesque Canada' in 1882. The company had premises in Wynyard Square, Sydney and employed a team of American and colonial artisans. It was lauded for providing much needed impetus in the Australian art publishing scene of the time. The Picturesque Atlas of Australasia was reprinted in 1887 and 1888 over 50,000 copies were sold.