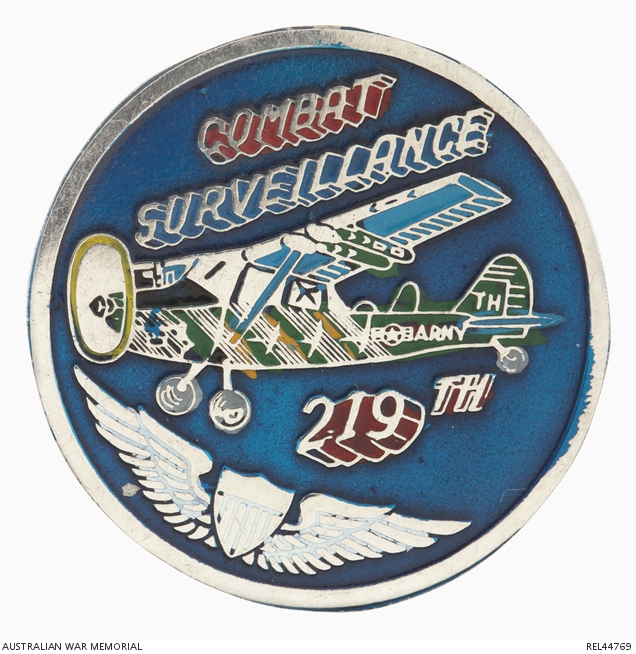 Enamelled circular metal badge featuring an armed flying Cessna O-1 'Bird Dog' liaison and observation aircraft with the words 'COMBAT SURVEILLANCE / 219th' above and below the aircraft. Under the left wing of the O-1 are a pair of rockets and on the tail of the aircraft are the letters 'TH'. The aircraft features black paint on top of the cowling immediately in front of the cockpit, with yellow and green markings on the fuselage. The undersurfaces of the aircraft are medium blue. The badge has a dark blue enamelled background representing the sky. At the bottom of the badge is a pair of US Army pilot wings. The back of the badge has a pair of vertically aligned pins.

This item was presented to Yvonne Barrett during one of her two tours of Vietnam.

Yvonne Frances Barrett, born 1946, was an Australian performer and resident of Braybrook, Victoria. By the age of ten she was already appearing in pantomimes and TV dance shows in Melbourne, as well as stage shows such as 'The Sound Of Music' and 'Carnival'. When she spoke to the 'Australian Women's Weekly' in July 1964, she expressed a keenness to develop herself as a musical-comedy star. Barrett became a regular on TV's Go! Show and signed to Go! Records, achieving chart success in 1965-66 with singles such as 'You're the One' and 'Send her Away.'
Barrett undertook two tours of Vietnam as an entertainer. Her first tour was also the first to be sponsored by the Australian Government, designed to provide Christmas entertainment for Australian troops in Vietnam and Thailand. The group chosen included entertainer and celebrity Tommy Hanlon Junior, singer/guitarist Ian Turpie, and fellow Go! Show singer Pat Carroll. It was inspired by a successful tour conducted at their own expense by Lucky Starr and the Rajahs.