Winston Churchill: " We shall never surrender..." 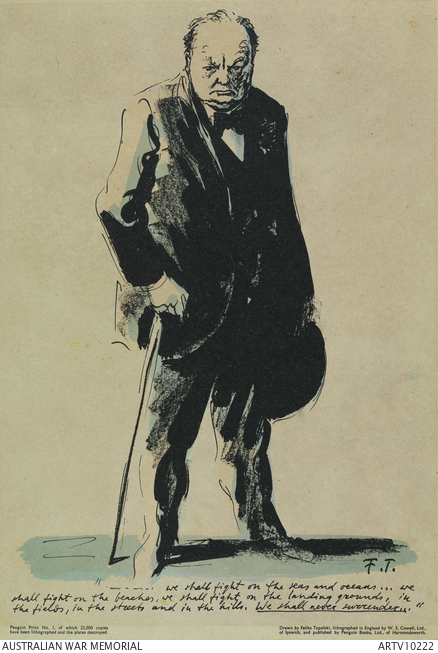 No. 1 of four British Second World War propaganda posters featuring drawings by Feliks Topolski. The series was commissioned by Allen Lane (1902 - 1970) of Penguin Prints between June 1940 and March 1941 during the period of the Second World War known as the ' phoney war'.

This poster features a three quarter length portrait of Winston Churchill by Topolski and illustrates the iconic status attained by Churchill during the period 1940 - 41 when the threat of invasion was very real to Britain. It also provides insights into the production of wartime propaganda by private companies. Designed to boost morale the posters would have been pasted on the walls of public bomb shelters, barracks and bars. Copies were also allegedly dropped over Germany and later appropriated copies were printed by the Ministry of Information with Arabic overprinting.

Topolski worked in an expressionistic style. Inspired by seventeenth century broadsheets he created his own chronicles of contemporary life producing 24 issues every year between 1953 and his death in 1989. Filled with vital black and white illustrations which the artist printed himself in his studio on brown paper. His draughtsmanship and ability to draw quickly from life are evidenced in these publications and in this portrait of Churchill. The nature of this series commission resulted in a poster with aesthetic qualities generally not present in other second world war propaganda posters depicting Winston Churchill.