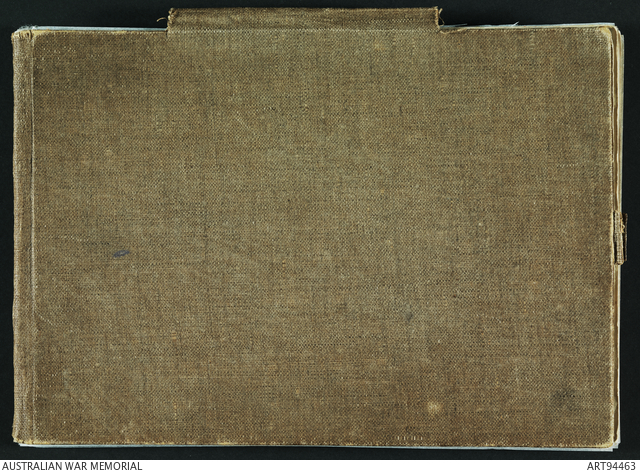 A sketchbook by Private John Beech (Dunbar), who served in the 34th Battalion, Australian Imperial Force (AIF), during the First World War. This sketchbook consists of 26 pages which contains 25 hand-drawn sketches in pencil, pen and ink, and watercolour with a number of recipes and newspaper/publications cuttings throughout chosen by the artist. The drawings are studies of men and women, including soldiers, nurses and civilians during the First World War.

Ernest (John) Dunbar was born in Scone, in the Upper Hunter Valley in the New South Wales, on 18 June 1890. At the age of 24, in 1915, John Dunbar enlisted in the Australian Imperial Forces and was assigned to the 3rd Reinforcements of the 13th Battalion. After a month of training, John was dispatched to Egypt, before landing at Gallipoli on the evening of 25 April 1915. A month later, he was hit by Turkish shrapnel and evacuated to Egypt. It was during this second stay in Egypt that he contracted venereal disease, forcing his return to Australia to an isolation hospital in Victoria. Dunbar deserted in December 1915, before he could be discharged for being medically unfit. A warrant was issued for his arrest as a deserter in March 1916.

Using the assumed name of John Beech he re-enlisted and was assigned to the 3rd Reinforcements for the 34th Battalion. While in Passchendaele, he was wounded again, before being returned to the field to then suffer a gas attack. He was eventually invalided back to Australia with trench foot in August 1918.

He struggled with the consequences of his two identities and in September 1924 he revealed his true identity to the army, and his medal and pension rights could be restored to him in his real name. He died aged 35 in January 1925 and is buried in an unmarked grave in Cheltenham cemetery. Australian War Memorial and National Archives records reflect that Dunbar and Beech are the same man. This sketchbook was made during Beech’s recuperation following the gassing in Passchendaele.