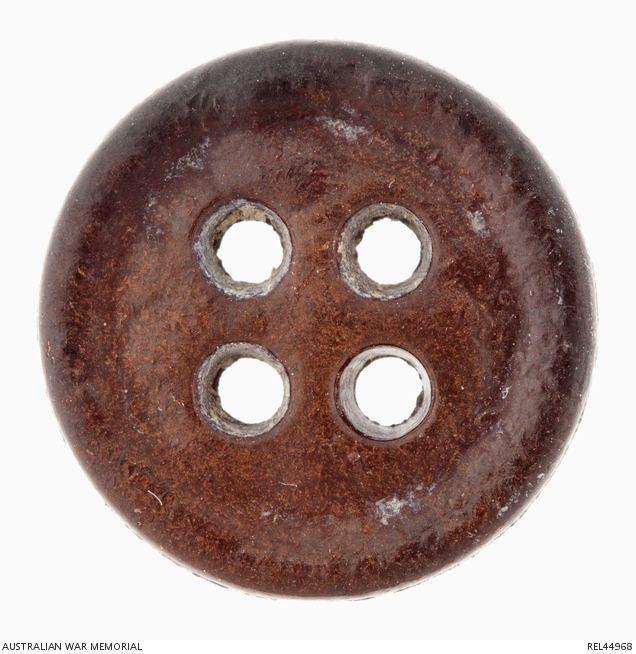 This button relates to the Battle of Fire Support Base (FSB) Coral. It was collected in this location in October 2011 by a veteran of the battle, Mr. Tony Jensen. The button is of the type only worn on the uniforms of Australian Task Force in South Vietnam during the war.

FSB Coral was one of several bases established to intercept and disrupt the approach of enemy forces towards the Bien Hoa-Long Binh base complex and the capital, Saigon. The occupation of Coral began on 12 May 1968, but the defences remained unfinished when at about 3.30 am on 13 May, it was attacked by the North Vietnamese Army (NVA) following a brief but intense rocket and mortar barrage. As 1 RAR Mortar Platoon's second-in-command, Jensen was stationed on the northern perimeter of the FSB and was resting in a shell scrape when the enemy bombardment began. The mortar platoon position was over-run, along with one of 102 Field Battery's six 105 mm M2A2 howitzers in the base. With the aid of extensive air support, the attack was beaten off by 6.30 am and the captured gun-pit was retaken - still with the gun in it. This howitzer is now in the Memorial's collection (REL26769).

Nine Australians were killed and 28 wounded, while the attackers lost more than the 52 bodies they left behind. On the morning on 16 May Coral again came under attack by enemy forces. The base was now more heavily defended and the attack was repelled after four hours of fighting, with the Australians having suffered five more men killed and nineteen wounded. On 22 May Coral was subjected to yet another rocket and mortar barrage, but this time the NVA troops were dispersed by return fire from 1 RAR's mortars as they formed up to attack. Although there were further bombardments on 26 and 28 May, and patrols sent out from the base came into contact with the enemy, Coral was not seriously threatened again.

Jensen was born on 17 March 1945, he applied for and was accepted into the Royal Military College Duntroon in 1963, and he was given the regimental number 235316. He successfully graduated from RMC in 1966. His first posting was to the 1st Battalion Royal Australian Regiment (1RAR), he then completed the courses necessary to use Australian 81mm mortars and lead the Mortar Platoon. Jensen served in South Vietnam between 27 March 1968 and 28 January 1969. After his return from South Vietnam he continued on a successful career within the Army until his retirement from the Army at the rank of Lieutenant Colonel.