On the night of 21 June 1981, while participating in international naval exercises, the crew of ... 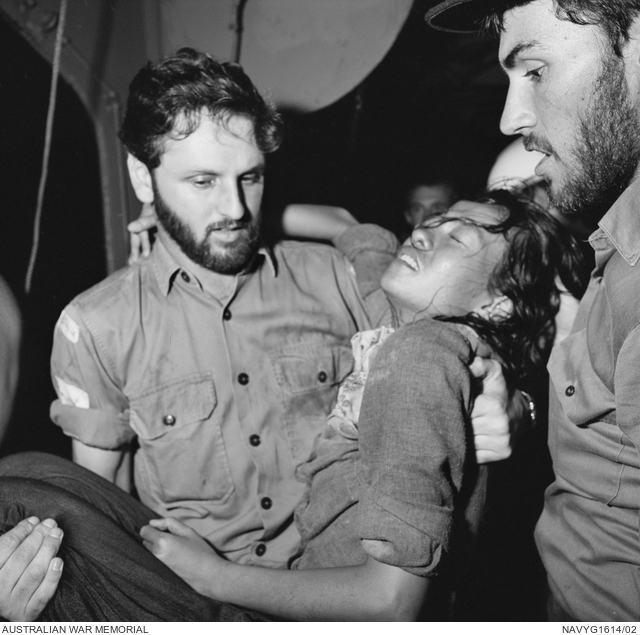 On the night of 21 June 1981, while participating in international naval exercises, the crew of the RAN Majestic aircraft carrier HMAS Melbourne II rescued 99 Vietnamese men, women and children from a leaking, overcrowded boat in the South China Sea. The boat had been at sea for four days, the engine was no longer working and the refugees had very little food or water. On the Melbourne they were given medical attention, clothing, bedding, food and water. The Melbourne continued to participate in the exercises while at the same time caring for the refugees and undertaking other humanitarian roles related to injured or ill seamen from other ships. HMAS Melbourne then continued on to Singapore arriving on Friday 26 June. United Nations and immigration official boarded the ship and processed the refugees before transferring them to the Hawkins Road refugee camp run by the United Nations High Commissioner for Refugees. The refugees became known as the Melbourne Group 99 (MG99). Commander John Ingram of the Melbourne took an active role in the rescue and care of the refugees on board the ship and in Singapore where he arranged for supplies of food to be sent to the camp. HMAS Melbourne requested that the Australian government resettle the 77 refugees who had asked to be sent to Australia rather than Europe or the United States of America. This group arrived in Australia in July 1981.