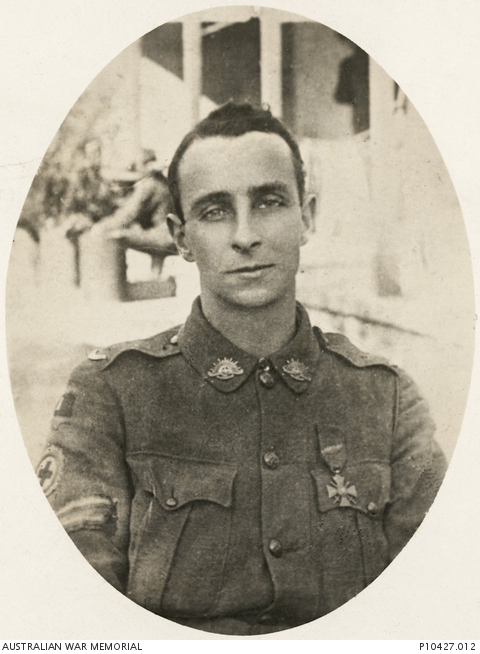 Outdoor portrait of 160 Acting Corporal (Cpl) Hubert Wallace 'Jack' Strout, Australian Army Medical Corps, wearing his French Croix de Guerre medal. An ambulance officer from Moore Park, NSW prior to enlistment he embarked with the rank of Private with the 1st Australian Field Ambulance from Sydney on HMAT Euripides on 20 October 1914. Whilst serving at Gallipoli he was awarded the French Croix de Guerre for his actions in rescuing wounded comrades. Later wounded in action, he was invalided to England and later returned to Australia where he was medically discharged. Later re-enlisting, he re-embarked for overseas service from Sydney on HMAT Hororata and was promoted to Acting Corporal, but became ill in transit and disembarked in Capetown. He was transferred to the City Infectious Hospital where, on 20 September 1917, he died and was buried in the Woltemade Cemetery, Capetown, South Africa.