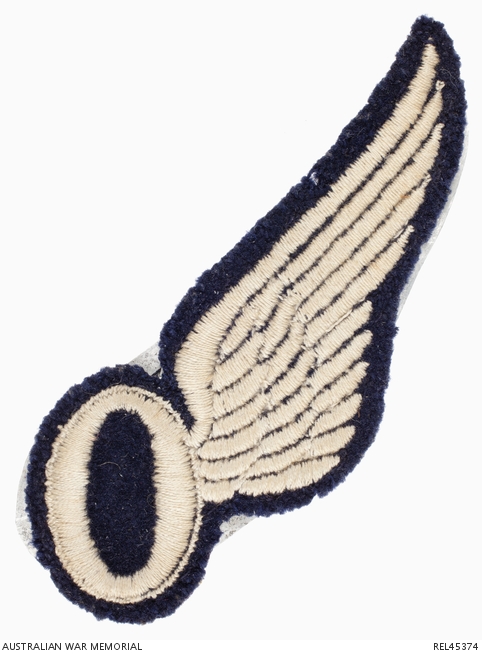 Observer's qualification cloth badge (brevet). Embroidered brevet has a detailed cream wing attached to a cream 'O', all on a dark blue background. The badge is sewn onto an aluminum backing plate along holes drilled along the edge of the plate. Two fastening lugs are attached to the back of the plate. Another aluminum plate, cut to shape with two holes to accommodate the attaching lugs, is also present as is a third smaller plate with two corresponding holes. The fastening lugs protrude through the plates and a safety pin secures the assembly in place.

Frederick Stephen William 'Fred' Dyer was born on 1 August 1921 at Adelaide, SA. He was an apprentice sheet metal worker at W J Rawling (a tinsmith and iron monger business) when he enlisted in the RAAF on 18 July 1942 with the service number 417820 and mustered as a navigator. He received basic training at schools in Australia (mainly in South Australia) and rose to the rank of temporary sergeant before embarking for further training in Canada as part of the Empire Air Training Scheme. Just before his departure from Brisbane he married Martha, who settled in Ethelton where his parents also lived.

Arriving in Canada in May 1943, he was attached to the Royal Canadian Air Force and continued his training, advancing from Avro Ansons to Lockheed Hudsons before converting to Douglas DC3 Dakotas with 31 Operation Training Unit (OTU). He completed his Canadian training in November 1943 with the rank of flight sergeant and transferred to England where he continued his training at 107 OTU and was eventually assigned to 233 Squadron (RAF Transport Command) in late June 1944, with the rank of pilot officer. Based at Blakehill Farm, Wiltshire, 233 Squadron had operated on D-Day, towing gliders and carrying troops from the 3rd Parachute Brigade; they also flew over twenty resupply flights later that day. Pilot Officer Dyer was one of the replacement crew for those who were casualties on D-day and the days following.

The squadron was used for casualty evacuation from the beachhead, before flying 37 sorties on the first two days of the Battle of Arnhem on 17-18 September and 35 supply missions. On 21 September, while on a supply flight in Dakota KG-399 to drop oil and mortar bombs in front of the Hartenstein Hotel at Oosterbeek in the Netherlands, Dyer’s plane was hit by flak over the drop zone (but only received light damage) and was strafed by a Focke-Wulf 190 on its return to England. This started a fire which took hold on the port wing and fuselage. Dyer and wireless operator Flight Sergeant Jack Hickey baled out at about 800 ft (approximately 243 metres). They landed in a forest clearing and, after being fired on, ran until they reached a Dutch farm house. The Dakota crash-landed 3.5 kilometres from Hooge Mierde, about 110 kilometres to the south west of Oosterbeek, very close to the Belgian border.

Dyer elaborated on his story years later: “One shot came though the cabin just in front of Mike’s feet and out through the top of the cabin.” The Dakota was carrying four army personnel to push the load out as well – although he did not see them, they jumped out after him, and were captured. By this time “the forward part of the fuselage had been enveloped in flame … the pilots were trapped and died of burns near the crash.”

After Dyer and Hickey landed, they heard rifle shots, some hitting the trees near them but it quietened down and they hid to make a plan. They decided to put themselves at the mercy of the Dutch and walked to a nearby farm occupied by the Valckx family. The family (which included eleven children) put themselves at great risk by hiding and protecting the airmen. They hid Dyer and Hickey in their barn, fed them a meal of bacon and eggs and clothed them. Dyer noted that “as I had been working in my shirt-sleeves, my jacket was left in the aircraft, so the eldest daughter gave me a pair of old overalls and a red woollen scarf”. The airmen hid in the barn or in the woods in the daytime and slept for much of the first two days. They spent twelve days hidden by the Valckx family, by which time it became obvious the Allied advance from Normandy had stalled.

On October 3 they decided to walk to British lines, accompanied by two Dutch guides. They had only reached the nearest village when they spotted an armoured car patrol from the Welsh Division and hitched a ride with them to Reusal, 8 kilometres to the east, where heavy fighting had been in progress for four days. The next day they were in Brussels; two days later they were back in England.

Dyer's parents were notified when he went missing, but not his wife Martha, who was told by his father (they lived two minutes’ walk from each other). It was another seventeen days before they found out he was safe, on 9 October. Dyer was promoted to flying officer just prior to returning to Australia in December of 1944; he transferred to the reserve and was discharged from the RAAF on 15 August 1945.