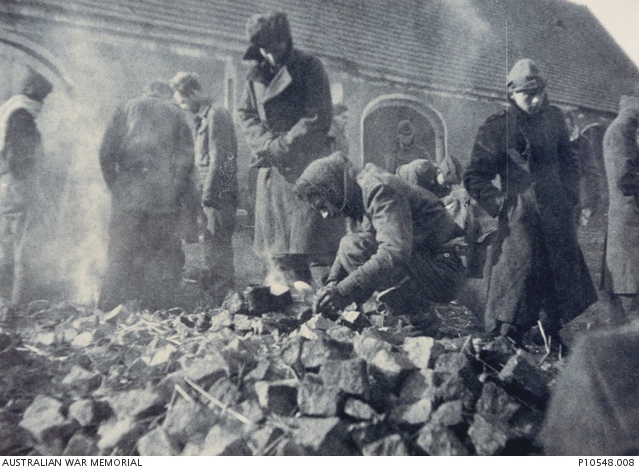 Prisoners of war (POW) from Stalag VIII B (344), Lamsdorf, Silesia (now Lambowice in Poland) during an enforced march westward to escape the advance of Soviet forces. On the second night of this march, POWs slept in the ruins of a brickworks. This event later became known as 'The Lamsdorf Death March', where many fatalities occurred. This photograph is part of a collection of images relating to the service of 411324 Warrant Officer (WO) Laurence Hickson, RAAF and his time as a POW in Stalag VIII B. WO Hickson was aboard a Lancaster bomber undertaking a bombing raid over Germany when his plane was shot down on 17 January 1943. The crew parachuted to safety, landing in Ribnitz, where they were then taken prisoner of war by German forces and interned at Stalag VIII B. WO Hickson was repatriated in May 1945.