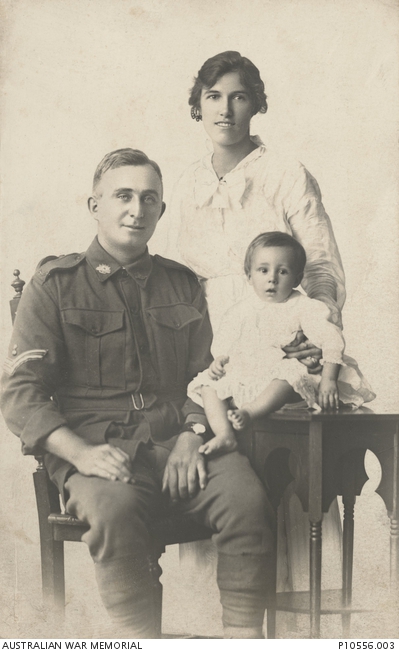 Studio portrait of 3012 Acting Corporal (A/Cpl) Gordon Walter Bone, 44th Battalion, his wife Bertha (nee Bysh) and their son Albert Gordon. Originally from London, England, A/Cpl Bone was a salesman from Subiaco, WA prior to enlistment and embarked with the 7th Reinforcements from Fremantle on HMAT Miltiades on 29 January 1917. Later transferring to the 4th Motor Transport Company with the rank of Driver, he became ill with influenza and bronchial pneumonia whilst on leave in England. On 28 October 1918, he succumbed to his illness and was buried in the Harefield Parish Churchyard, Harefield, England. His brother-in-law, 897 Sergeant Leonard Frederick Bysh, 44th Battalion, was killed in action on 4 October 1917.