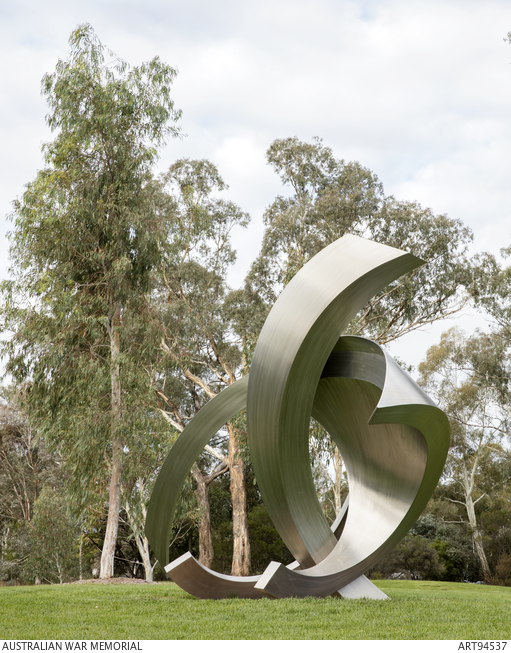 Memorial sculpture made to commemorate Australian civilians and servicemen who were killed in the defence of Rabaul and later in the sinking of the Montevideo Maru during the Second World War. The sea-themed memorial marks the horrendous loss of life that ensued from the invasion of the New Guinea Islands in 1942 and the sinking of the Montevideo Maru.

James Parrett is an Australian based sculptor who studied at Monash University, Caulfield in 1998 and at the Victorian College of the Arts, Melbourne in 2000. His art works pose questions of form, sculptural process and material. The sinuous sculptures, constructed mainly from stainless steel and marine ply maintain our awareness of the materials he chooses to use in his works.

Of this Memorial Parrett commented, "To those tens of thousands Australians who served in all the wars - and to those they left behind - this was indeed a sacred place [the War Memorial]. I felt I had to do justice to them and their memory and this special place by designing an abstract sculpture, outside the traditional memorial box, yet with a modern feel that will speak to future generations. Hopefully, it will not age. People will either like or dislike it but what matters most of all is when they walk around it, or stand under it, that they wonder and think about the event it commemorates. To me it is most important that the people who died in the tragedy are at peace and that everyone who comes to know about the event also feels at peace."

The Rabaul and Montevideo Maru memorial is currently off-display due to Development works at the Australian War Memorial.