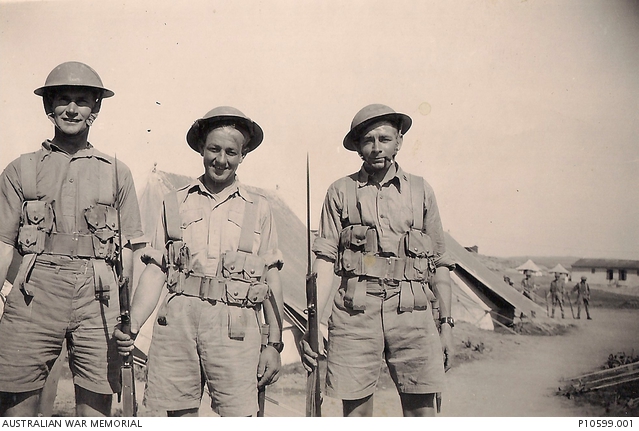 Outdoor group portrait of, left to right: SX7093 Sergeant (Sgt) Norman Badman; SX7313 Warrant Officer (WO) Charles Bruce Rule and SX9529 Lance Corporal (L Cpl) Alfred 'Rowdy' Lear, all of 2/48 Battalion. L Cpl Lear, from Broken Hill, NSW, was killed in action on 10 July 1942 during the El Alamein campaign. He was 30 years old. Sgt Badman saw action in Africa and the Pacific Theatre; WO Rule saw service both in Africa and in the Pacific at Lae, Morotai and Tarakan. He was wounded at Tobruk and was awarded a Mention in Despatches for outstanding service in the South-West Pacific. WO Rule's father served in the Boer War and during the First World War as Private Vivian Rule, 48th Battalion (see P09366.011).