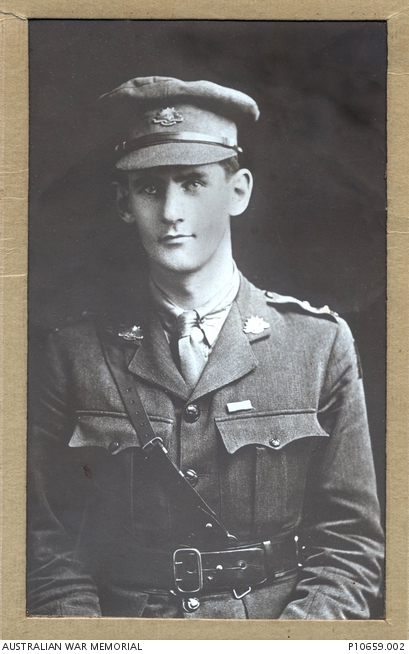 Studio portrait of Lieutenant Joe Tilson Lang, 53rd Battalion (ex 1st Battalion). Lang was working as fitter when he enlisted on 28 January 1915 as a private with the service number 1791. He embarked at Sydney aboard HMAT Argyllshire (A8) on 10 April, and was promoted to Sergeant the same month.

Lang was transferred to 53rd Battalion in February 1916 and commissioned as a second lieutenant in March. He arrived in France in June 1916 and was wounded the following month. He was promoted to lieutenant in September.

Lang was awarded the Military Cross in June 1917 for a series of patrols he led during the previous March and April, and was promoted to captain in July.
He was wounded in action for a second time in October 1917, but remained on duty.

Lang was discharged in December 1917 and took up a commission in the Indian Army the following month. He returned to Australia in January 1920 and resigned in September.

Lang worked as a mechanical and electrical engineer during the interwar years, and re-enlisted in November 1939 with the service number QX6067 and the substantive rank of captain. He was posted to 2/1 Army Field Workshop.

He was promoted to major and transferred to 2/2 Pioneer Battalion in May 1940.

Lang embarked for service overseas with his unit in April 1941. The following June he sustained gunshot wounds to his left arm and left flank and was evacuated.
He was promoted to lieutenant colonel in September 1942, eventually returning to New Guinea in July 1943.

Lang was Mentioned in Despatches in March 1945 for exceptional service in the field in New Guinea. He was discharged the following June, and in February 1946 was awarded the Officer of the Order of the British Empire for distinguished service during his posting at the Australian base at Aitape.