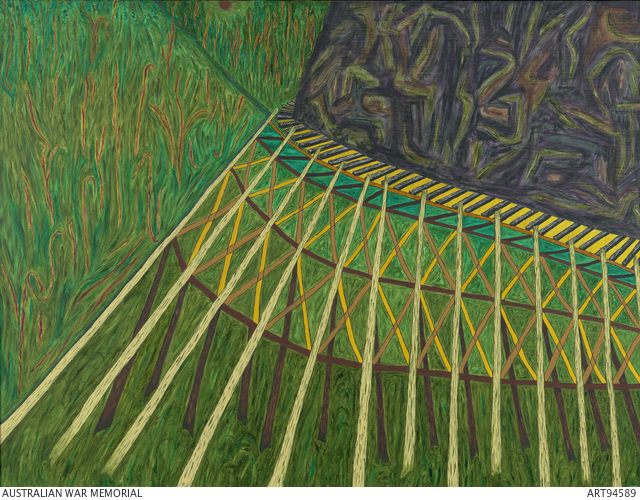 This painting features the bridge constructed by POWS near Hintok. Known as "Pack-of-cards bridge" it was 400 metres long and 27 metres high and built from green jungle timber. Many Australian POWS lost their lives labouring during its construction. Tallis's expressive style, use of intense colour and incorporation of symbolic visual elements of the bridge has resulted in a work with strong emotive qualities. Themes related to the suffering caused by conflict especially the psychological and social impacts on veterans have long been the focus of Tallis's art.

One of four paintings commemorating Australian POW experiences constrcuting the Thai/Burma railway. These paintings form part of a larger series called 'Bad Dreams' created by Marion Tallis between 1984 and 1987. Tallis was inspired to create this series after listening to Tim Bowden's 1984 ABC radio series 'P.O.W Australians Under Nippon' and researching diaries, autobiographies and photographs of former POWs. The paintings are composed of symbolic elements of the POW experience - such as wooden bridge struts, railway sleepers - set against intensely coloured abstract backgrounds. The verdant greens and bright yellow allude to the jungle environment experienced by POWs on the railway.