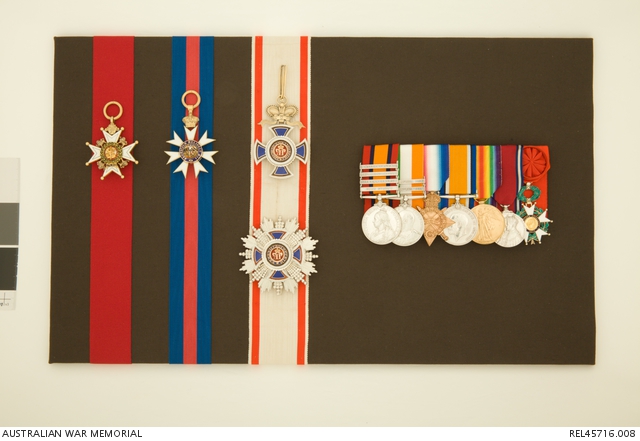 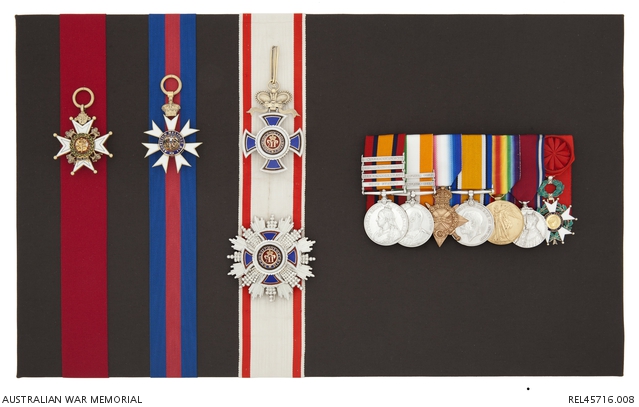 James Gordon Legge was born in London in 1863 and emigrated with his family to Australia in 1878. Legge’s long association with the military began while he was studying for his law degree at the University of Sydney in 1885 when he was commissioned an officer with the 3rd NSW Infantry Regiment. Graduating in 1890 he abandoned his law career in favour of a permanent position with the NSW Military Forces in 1894. Shortly afterwards he spent a period of training with the British Army in India.

In 1899 Legge left Sydney to serve in the Boer War, commanding an infantry company that was incorporated into the New South Wales Mounted Rifles. He returned home in 1902 and continued his army career, gaining experience in a number of appointments. He was promoted to lieutenant colonel and assumed the new post of Quartermaster-General in January 1909. A long-time advocate of compulsory military service, Legge was instrumental in the development of the universal training scheme and was made Companion of the Order of St Michael and St George (CMG) after the scheme’s implementation in 1911.

The First World War was declared while Legge, now colonel and Chief of the General Staff, was returning from England as Australia’s representative to the Imperial General Staff. On his return he immediately set about raising contingents for the Australian Naval and Military Expeditionary Force and Australian Imperial Force.

With the death of Major General Sir William Throsby Bridges on Gallipoli in May 1915, Legge was appointed as his replacement as commander of the AIF. An intelligent but unpopular officer, his appointment to succeed Bridges was met with much resentment from senior officers. Nevertheless, Legge arrived on Gallipoli on 22 June 1915, promoted to major general and given command of the Australian 1st Division, the only Australian division then in the field.

Legge’s command of the 1st Division was short lived. A month after arriving on Gallipoli, he was recalled to Egypt to form and command the new 2nd Australian Division. He returned to Gallipoli with the 2nd in late August but illness forced his evacuation in November and he did not return to the peninsula.

In March 1916 Legge’s Division moved to France and took over trenches of the Western Front for the first time near Fleurbaix in April. In late July, Legge was tasked with capturing the ridge above the village of Pozieres. The attack failed, and Legge was held largely responsible for the 3500 casualties incurred by his division. Further operations in 1916 had mixed success. For 'distinguished services, during the course of the campaign', Legge was awarded the Order of Danillo 2nd Class by the King of Montenegro in October 1916.

Legge fell ill late in December 1916 and was evacuated to England the following month, relinquishing command of the 2nd Division. For his organisation of the division he was awarded the Order of the Bath, and mentioned in despatches. Realising that he would probably never again hold an operational command he chose to return to Australia. He embarked from Plymouth on 16 February 1917 and his appointment to the AIF was terminated soon after his arrival in Australia two months later.

Though his capacity for front line command was questioned his 'encyclopaedic knowledge of military matters in general and of Australian administration in particular' were noted by at least one of his contemporaries. In late April he was appointed inspector general of the Australian Military Forces with a temporary rank of major general and, later that year, was re-appointed Chief of the General Staff. Two major issues facing Legge during 1917 and 1918 were that of conscription and the welfare and resettlement of returning soldiers following the cessation of hostilities, particularly the incapacitated.

On 4 October 1918, he was dealt a severe blow when his eldest son, Private George Ferguson Legge, was killed in action fighting near Montbrehain with 22nd Battalion. Though Legge 'never [had] the full confidence of his superiors', according to First World War historian Charles Bean, he alluded to Legge's democratic and egalitarian principles when he observed that he 'might easily have had [his son] raised to the rank of officer or in moderate safety on the staff' instead of fighting in the front line.

Between 1920 and 1922 Legge was commandant of the Royal Military College, Duntroon during a period of severe budget cuts and military restructuring. His long military career effectively ended when he was placed on the Unattached List on 1 August 1922 due to defence force reductions. He was eventually placed on the Retired List with the honorary rank of lieutenant-general in January 1924. The following month he was awarded the French Legion of Honour.

Although his career spanned more than three decades, Legge failed to reach the prescribed retirement age and was denied a pension. With assistance from the post-war soldier settlement scheme he was able to retire to Cranleigh Farm at Weetangera near Canberra where he became a virtual recluse. He died in Melbourne on 18 September 1947.

Events and his own personal unpopularity robbed Legge of a much greater legacy, asserts biographer Chris Coulthard-Clark with some justification. Certainly the intervention of the First World War, according the Coulthard-Clark, 'deprived [Legge] of probable recognition as the father of the modern Australian Army'.