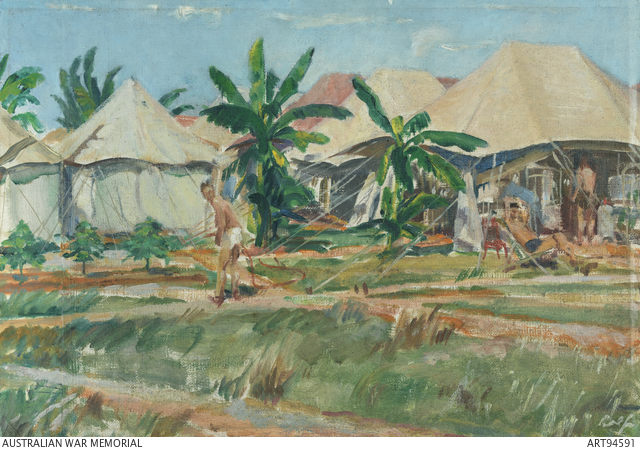 A vivid and impressionistic oil sketch bringing to life a field hospital in Northern Australia described as being 'fully under canvas and capable of being moved at a moment's notice'. Several orderlies are seen relaxing in the upper right and maintaining the hospital's garden. This painting was reproduced in a feature on Australian troops in the Northern Territory in 'the Australian Women's Weekly', 15 January 1944. William Edwin Pidgeon (1909-1981) was a painter, cartoonist, illustrator and newspaper critic. Working with Consolidated Press, he was appointed a war correspondant and artist in 1943. He became renowned for his cartoons signed with his initials, 'WEP'. During the Second World War many of his illustrations were published in the 'Australian Women's Weekly' and on the cover of the magazine. His humourous works conveyed the lives, personalities and conditions under which Australian troops served in Darwin, New Guinea and Borneo. During the Second World War he also contributed cartoons to the Army periodical, SALT. After the war he continued to provide illustrations for books during the 1950s, but mainly concentrated on portrait painting. He won the Archibald Prize in 1958, 1961 and again in 1968 for a portrait of fellow artist Lloyd Rees. From 1974-79 he served as the art critic for the 'Sunday Telegraph' newspaper.