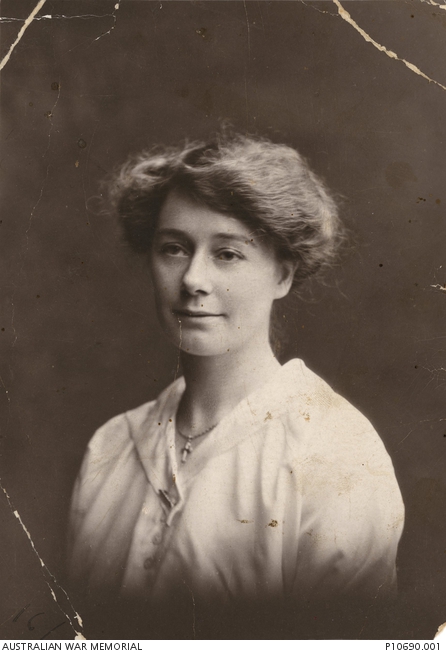 Studio portrait of Gertrude May Corigliano (nee Haddow). Gertrude married Lieutenant Commander (Lt Cdr) John Vincent Coriglano in the district of Portsmouth, United Kingdom on 27 January 1919. This is one of a series of photographs that relating to Lt Cdr John Vincent Corigliano. Corigliano joined the SA Naval Force on 1 July, 1898 and embarked with HMCS Protector on 6 August, 1900 for China and returned to Australia on 6 January, 1901. Subsequently he served aboard HMS Katoomba, and HMS Challenger and was one of the first members of the Commonwealth naval forces to be sent to England for special training in April 1907. Corigliano also took part in the ceremonies associated with the coronation of King George V, as a member of the Australian Naval contingent and was awarded the Coronation Medal. During the First World War he returned to Australia and served with HMAS Australia and was then transferred to HMAS Melbourne. His war service included operations which led to the capture of New Guinea, service in the Pacific and the in the North Sea and was the only engineer officer to remain on service afloat throughout the war. Corigliano was present at the surrender of the German Fleet, and in 1919 was promoted to commissioned warrant rank. Corigliano also enlisted in the Second World War with service number 7424, and was a port refuelling officer for Sydney Harbour. He retired from the Navy with the rank of Lieutenant Commander after 55 years of service and died at the age of 76.