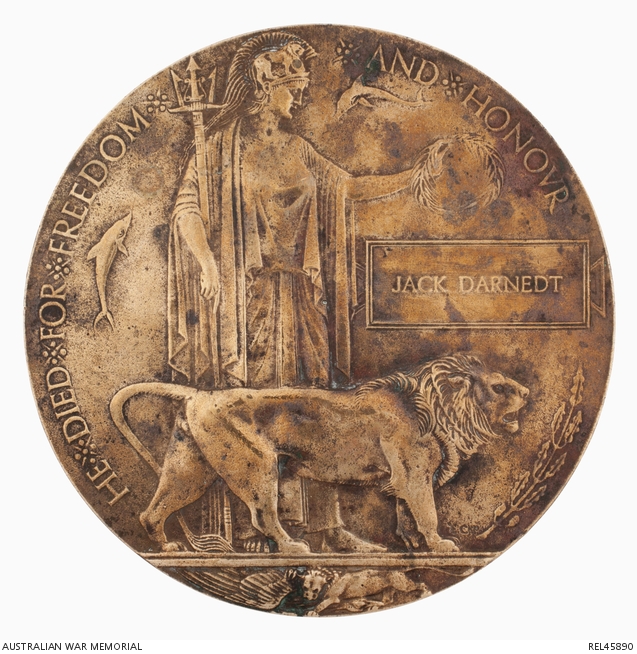 Bronze next of kin plaque. The plaque shows Britannia holding a laurel wreath, the British lion, dolphins, a spray of oak leaves and the words 'HE DIED FOR FREEDOM AND HONOUR' around the edge. Beneath the main figures, the British lion defeats the German eagle. The name of the dead soldier, 'JACK DARNEDT', is inscribed in raised letters within a raised rectangle. The initials 'ECP', for the designer Edward Carter Preston, appear above the lion's right forepaw.

John Joseph Edward 'Jack' Darnedt was born in Collingwood, Victoria in 1899. He was working as a trainer and serving with the Senior Cadets when he enlisted in the AIF under the alias Jack Kerrigan on 23 August 1916. After initial training at Castlemaine, Victoria, he was assigned as a private, service number 2686, to the 6th Reinforcements of the 59th Battalion. He embarked from Melbourne aboard HMAT A71 Nestor on 2 October, bound for training in England.

A month after his arrival, Kerrigan, attached to 15 Training Battalion, made a statutory declaration to the effect that his correct name was John Joseph Edward Darnedt. He stated that he had taken the name Jack Kerrigan to pass the medical examination for entry into the AIF as he had already failed under his real name due to a problem with his left foot. It is not known why he chose the name Kerrigan, but his parents appear to have been complicit with his decision, as they gave written permission for his under-age enlistment using the surname Kerrigan.

Darnedt embarked for France and service on the Western Front on 30 December 1916, aboard the Princess Clementine. The following day he marched into Etaples for further training. He was taken on strength of 59th Battalion on 7 February 1917. After only three weeks with his unit Darnedt was detached for duty with the YMCA, where he worked for five months, rejoining his unit on 1 August.

59th Battalion fought in the battle of Polygon Wood, part of the Third Battle of Ypres, from 26 September 1917. Darnedt was killed in action near Blackwatch Corner, one of 268 casualties suffered by the battalion on the first day of the Polygon Wood action. His body was not recovered for burial at the time and could not be located after the war. His name is commemorated on the Menin Gate Memorial in Belgium.

This commemorative plaque was sent to his widow, Mary Josephine Darnedt, in October 1922. The couple had married in 1916 shortly before Jack embarked for overseas service.