Informal group photo of some of the crew of 101 Squadron RAF Lancaster LL861 SR-H. The aircraft ... 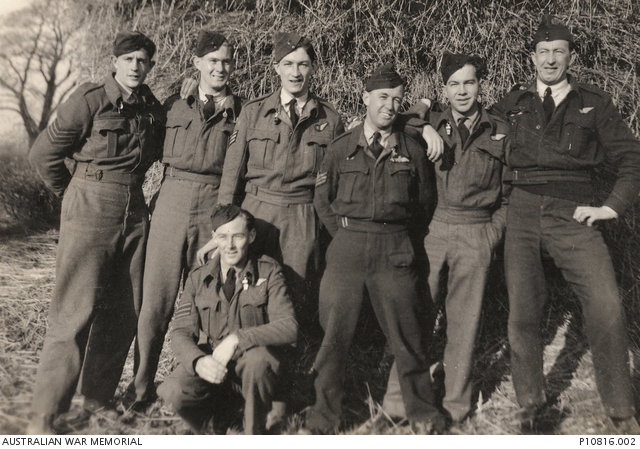 Informal group photo of some of the crew of 101 Squadron RAF Lancaster LL861 SR-H. The aircraft was shot down without survivors by a Messerschmitt 110 night fighter on the night of 30-31 March 1944, on the outward flight of a bombing mission to Nurnberg. SR-H was one of the aircraft in the bomber stream tasked with ABC duties. ABC , short for "airborne cigar", was radio jamming equipment designed to disrupt enemy night fighter communications. From left: 426999 Flight Sergeant (Flt Sgt) John Bede "Jack" Newman RAAF; 427016 Flt Sgt John Alfred Noske RAAF; Sgt Frank Phillips RAF ; 420950 Pilot Officer Donald James Irving RAAF; 413771 Flt Sgt Norman Huggett RAAF ; 412542 Flt Sgt George King RAAF; (in front) Flt Sgt Walter Joseph Adam RAAF. Absent from photograph is Flying Officer R F Litchfield, RCAF.
In a letter to his sister Ellen and her husband Mick, written in August 1943, Flt Sgt Norman Huggett described some of his fellow crew members: "The pilot, Don Irving, hails from Bondi - nickname Shorty, for obvious reasons, and like most "shorties" talks ceaselessly from dawn till dawn; the blackout fails to dampen his good spirits. George King, our navigator, looks down on us from 6 feet odd and once again for obvious reasons, and although he does not suffer from B.O., his nick name is "Stinker". The bomb aimer, John Noske, the baby of the push, and Wal Adam our gunner are two of the quietest chaps I ever met but they're good cobbers all of them and stick like glue or something to a blanket. There is only one disadvantage with our team, from my viewpoint and that is that I am the only smoker amongst them and when on those rare occasions, as Ellen will verify, when I do run short I have no one to "borrow" off. However, we see eye to eye over most things, we enjoy our outings together and more important we turn the pace on with our work. Being the eldest by a few months I'm the Daddy of the team, but that position has no privileges nor responsibilities so I don't mind."