Outdoor group portrait of two soldiers with their sisters, who are wearing the soldiers' hats. ... 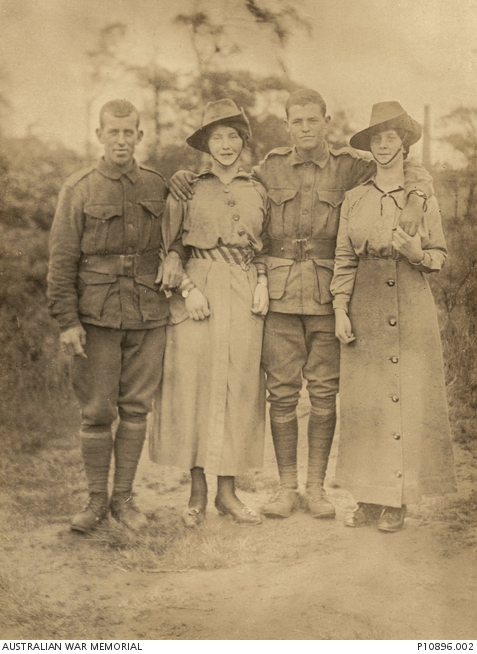 Outdoor group portrait of two soldiers with their sisters, who are wearing the soldiers' hats. Identified are 4116 Private (Pte) James Cameron and his brother 4115 (Pte) Donald Cameron. The brothers are from Reid River via Townsville, Queensland and both served with the 26th Battalion. James was a 28 year old labourer prior to enlisting on 27 September 1915, Donald a 19 year old draper's assistant when he enlisted the next day. They embarked for overseas with the 10th Reinforcements from Brisbane on 28 March 1916 aboard HMAT Commonwealth (A73) and sailed to England, via Egypt. Following further training in England, they joined the 26th Battalion in France on 28 September 1916. James Cameron was wounded in action at Dernancourt, France but recovered to return to his unit. In December 1916, he spent nine days on temporary attachment to the 7th Trench Mortar Battery. He was killed in action on 3 May 1917 near Bullecourt, France and is commemorated on the Australian National Memorial at Villers-Bretonneux, France with others who have no known grave. Donald Cameron was invalided to England with trench foot in October 1916 and did not return to his battalion until April 1917. He was wounded in action at Broodseinde Ridge, Belgium on 31 October 1917 but returned to his battalion five weeks later. On 14 July 1918, Donald Cameron was wounded in action near Villers-Bretonneux and died from his wounds on 17 July 1918. He is buried in the Crouy British Cemetery, Crouy-Sur-Somme, France.