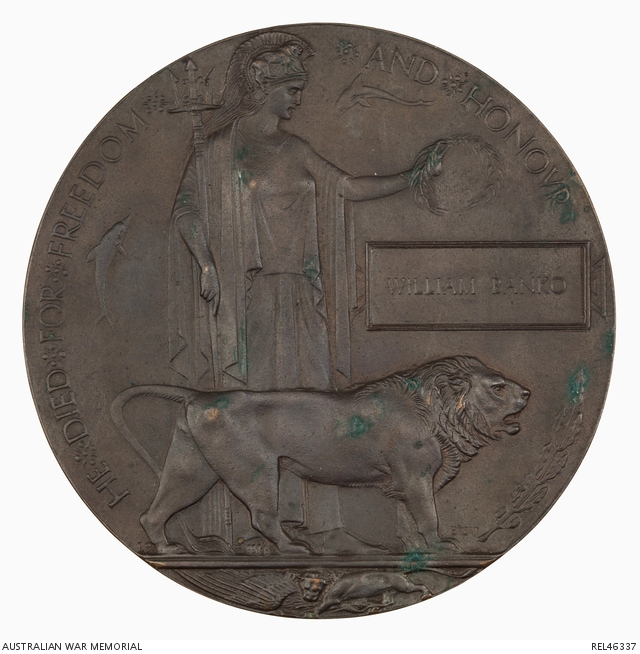 Bronze next of kin plaque, showing on the obverse, Britannia holding a laurel wreath, the British lion, dolphins, a spray of oak leaves and the words 'HE DIED FOR FREEDOM AND HONOUR' around the edge. Beneath the main figures, the British lion defeats the German eagle. The initials 'ECP', for the designer Edward Carter Preston appear above the lion's right forepaw. A raised rectangle above the lion's head bears the name 'WILLIAM BANKO'. A checker's mark, '19', is impressed behind the lion's left rear paw.

Born in Kyneton, Victoria, William Banko was working as a farm hand at Kerang when he enlisted in the AIF on 31 July 1916. After training at Seymour and Langwarrin he was posted a private, service number 2519, to the 4th Reinforcements for 3rd Pioneer Battalion. He sailed from Melbourne for overseas service on 21 October, aboard HMAT A16 Port Melbourne.

After further training in England and France Banko joined A Company of his battalion at Armentieres, France on 16 March. At Messines, on 7 June, as dawn was breaking, Banko was working on a sap when a shell burst close to him wounding him on the right side and causing a penetrating wound to the abdomen. He was evacuated to the 2nd Australian Casualty Clearing Station at Steenwercke but died there early the next morning, aged 23. He is buried in the Trois Arbres Cemetery at Steenwercke.

This commemorative plaque was sent to his father, James Alexander Banko, in August 1922.