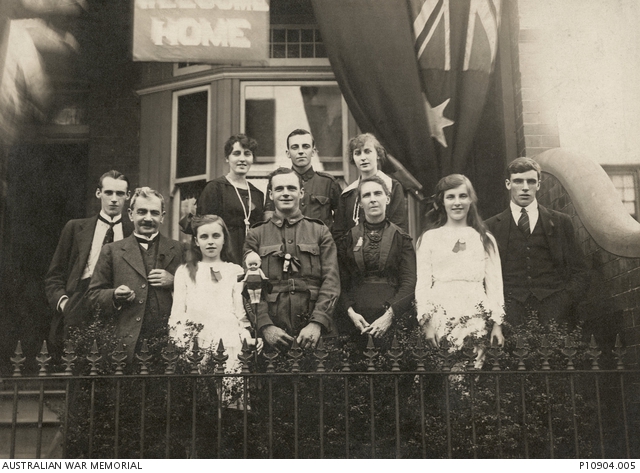 Informal group portrait taken on the homecoming of Lance Sergeant (LSgt) George Edward Bingley, 14th Machine Gun Company. Back row, left to right; unidentified, Bert Smeale, unidentified (possibly wife of Bert Smeale). Front row, left to right; Percival Bingley, Mr William Edward Bingley, Clarice Bingley (holding a kewpie doll on a stick), LSgt George Edward Bingley (note the small kewpie doll fixed with ribbon on his tunic), Mrs Edith Bingley (nee Smeale), Enid Bingley and Alfred James Bingley. LSgt George Bingley was a motor body-builder from Darlington, New South Wales, and enlisted in August 1915. His brother Frederick had already enlisted, and his older brother Claud would enlist after him (note the Female Relatives Badge with two bars worn by Mrs Edith Bingley). George Bingley was initially posted to the 4th Battalion, transferred to the 53rd Battalion in February 1916, and then to the 14th Machine Gun Company in May 1916. His brother Claud was killed in May 1917. George sustained shrapnel wounds to right elbow and knee in April 1918, and was hospitalized in England (note the wound stripe on his left sleeve). He was discharged to training in August 1918, where he received notification that his brother Frederick had also been killed. He was still training when the Armistice was signed in November, and returned to Australia in April 1919 to discover that in his absence, his fiancée had married someone else. George Bingley never married, and family members relate that he never recovered from the loss of his two brothers. He died in 1974.