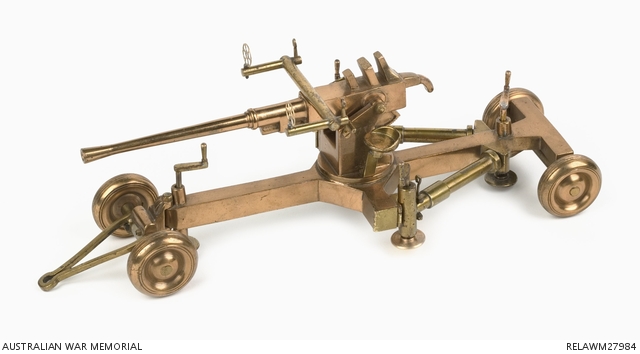 Brass scale model of a Bofors anti-aircraft gun in approximately 1:25 scale. Some major components (carriage, gun cradle & breech) have been cast while others have been milled from brass rod. Items are either soldered together, or attached with miniature nuts and bolts or with cotter pins. Working components include elevating barrel; rotating elevation and traverse levers; rotating cradle; rotating road wheels (the front wheels and towbar are removable); outriggers arms which can be stowed for travelling or (by opening a small hinged cover) fitted to the carriage. Both the outrigger arms and the carriage are fitted with operating screwjecks which can be raised or lowered. The gun is fitted with a pair of cartwheel sights.

Made by James Samuel Brown of Lithgow, NSW, while working in the NSW ammunition industry during the Second World War; possibly in a factory associated with the 40 mm Bofors anti-aircraft gun. As a Sapper, Brown had served during the First World War with 12 Field Company Engineers, and had been awarded a Military Medal for 'coolness, courage and devotion to duty' on 10 and 12 October 1917 at Westhoek and Zonnebeke, respectively, in Belgium, for organising evacuation of wounded and repairing a road whilst under fire at Westhoek and guiding a pack train out of danger during shelling at Zonnebeke despite suffering wounds to his lungs. 3765 Brown enlisted on 28 September 1915 and returned to Australia on 23 July 1918. His recommendation states that 'he has at all times during his 18 months service in France set a fine example of coolness and courage in the face of danger.' An image of Brown taken in France in April 1917 appears as AWM image A00921.