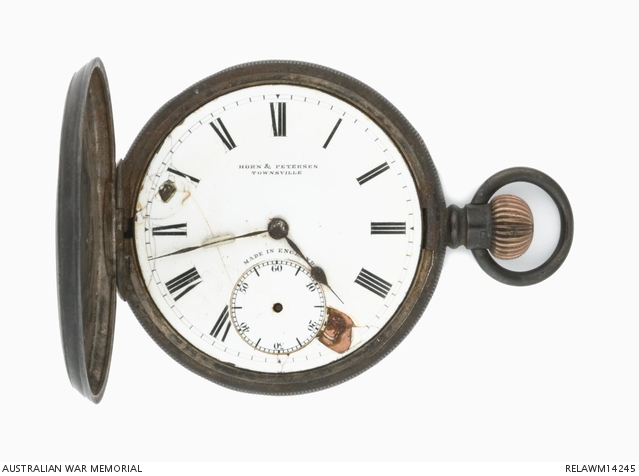 Hunter watch with sterling silver case, a white enamel dial with black Roman numerals and a copper-plated winder. A separate second hand dial is located at the lower section; the second hand is missing. The minute and hour hands have stopped at 4.43. A section of the dial's enamel has chipped off at the numbers 'V' and 'X', revealing the copper underplate in the 'V' area. The glass cover is completely missing except for a tiny sliver of glass wedged under the minute hand. The dial is marked 'HORN & PETERSEN TOWNSVILLE MADE IN ENGLAND'. The machine-gillouched cover has been engraved with a blank faux heraldic shield within a garter, where the owner's monogram might be inserted. The circumference of the watch body is milled as an aid to grip.

The interior of the outer rear case cover is impressed 'A.L.D. 819' and hallmarked with an anchor assay mark, a lion passant and an 'h', indicating manufacture of the case in Birmingham in 1907. The following is also scratched into the surface 'R. W. Hinchcliff (? - this is slightly unclear) / Melton Hill / Townsville'. The interior of the inner mechanism case cover is impressed 'DENNISON WATCH CASE 02', accompanied by hallmarks identical with the outer case, as well as 'A.L.D. 819 C'. The mechanism plate is gilded and marked 'English Watch Co / London /16 Jewels / 90253'. All the steel workings in the mechanism are corroded.

'A.L.D.' are the initials of Aaron Lufkin Dennison, the owner of the Dennison Watch Case Company.

This watch was carried by 385 Private Robert William Hartley, of 9 Battalion, AIF, during the landing at Anzac Beach Gallipoli, on 25 April 1915. The battalion was the first to land shortly before dawn. As the boats carrying the men came into the shore Hartley jumped overboard and landed in water so deep that his watch was soaked in seawater. As a result it stopped permanently, the hands marking the time of his landing, 4.43 a.m.
Hartley, a 30 year old clerk, enlisted from Townsville, Queensland, on 20 August 1914. He was assigned to the Army Medical Corps Details attached to 9 Battalion and sailed with them from Brisbane for overseas service aboard HMAT A5 'Omrah', on 24 September. The battalion trained in Egypt before embarking for Lemnos to join the Mediterranean Expeditionary Force on 2 March 1915. After landing at Gallipoli from aboard the HMS 'Queen', Hartley remained on the peninsula until he was evacuated sick to Malta on 28 October 1915. He eventually rejoined his unit in France and served with it until he returned to Australia on 28 November 1918.
The story of this watch surfaced in an article published in 'The Sydney Morning Herald' on Tuesday 25 April, 1933 (page 10 - 'Digger's Watch. Gallipoli Associations') which was noted by the then Director, Major Treloar. Treloar wrote to Hartley in July and August 1933, requesting the watch for the Memorial's collection, which Mr Hartley agreed to, donating the watch soon after. The article noted that 'The salt water entered the watch and stopped it. Now its works are rusted beyond repair, but Mr Hartley still carries this cherished watch which to him is a constant reminder of the zero-hour on the first Anzac Day.' Inspection of the watch confirms that all the steel components of the mechanism are indeed quite heavily corroded.
The names 'Horn & Petersen, Townsville' on the watch dial refer to a jewellers located in Flinders Street East, Townsville which carried stocks of watches, silver plate, rings and general jewellery and which supplied the Townsville, Cairns and Atherton Tablelands regions; the firm appears to have been established in the 1860s. One of the principles was Herman Horn, a watchmaker, who started with the firm in 1876. They advertised themselves as 'The Old Reliable Firm' and also sponsored local rifle shooting competitions with the 'Horn and Petersen Cup'.
The watch, made in 1907-08 in England, carries the name of this jewellers as an advertising device; this was a common practice for agents who acted as distributors rather than makers. Details scratched into the inside of the rear cover (probably by a jeweller) reveal a Townsville address.