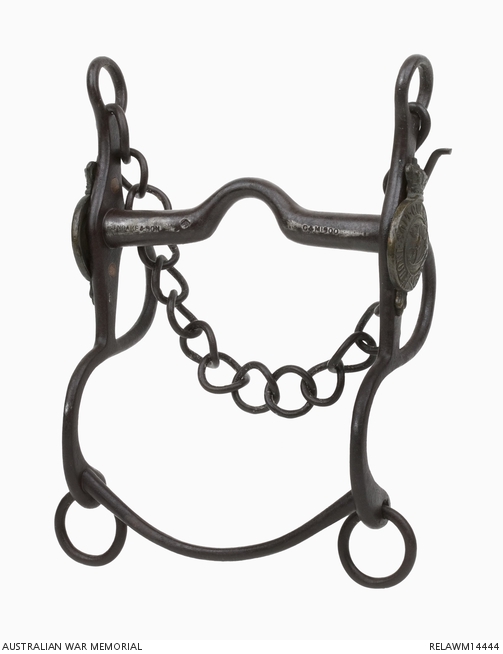 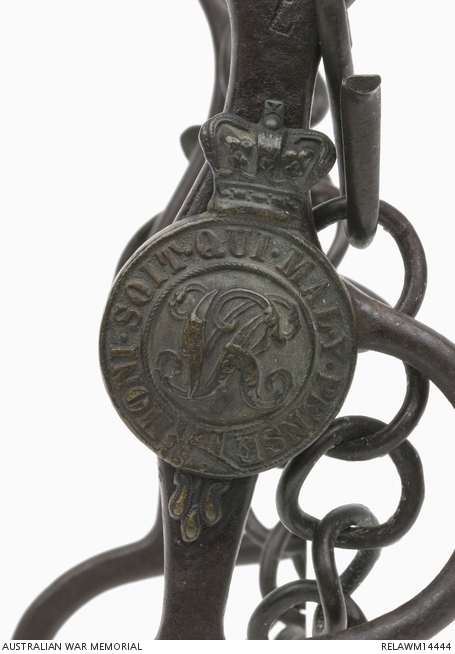 British Universal Pattern 1885 curb horse bit with single link curb chain, mouth piece with low port, and 'S' shaped cheek pieces secured at the lower end by a curved bar. Each side of the bit bears an ornamental brass boss showing Queen Victoria's cypher within a garter with the words 'HONI SOIT QUI MAL Y PENSE'. The front of the bit is stamped on one side of the port with 'J. NOAKE & SON' and a broad arrow acceptance mark, and on the other side 'C&M 1900'.

This bit, which would have been worn by a horse in conjunction with a lighter snaffle (bridoon) bit, was collected by 12 Trooper Herbert Sydney Dodds, who served with A Squadron, 5 Battalion, Australian Commonwealth Horse in the Boer War. The squadron was raised mainly from members of the New South Wales Lancers, a militia unit. 5 ACH was one of 8 Commonwealth Battalions raised in early 1902. All arrived in South Africa too late to see much, if any, active service. Dodds left Sydney aboard the transport Columbian on May 1902 and returned to Australia in August 1902 aboard the Manchester Merchant. He found this bit near Majuba Hill (also known as Mount Majuba) when the Commonwealth Horse camped there in 1902, soon after their arrival in South Africa. Although Dodds was of the opinion that the bit he had collected was a relic of the disastrous Battle of Majuba Hill in 1881, when the British were soundly defeated by Boer forces, both the pattern of the bit and date of manufacture stamped into the mouth piece attest to the fact the it must have been recently abandoned when he found it, and was in fact a relic of the same war in which he was fighting. Dodds, a keen horseman, retained the bit as a souvenir, and as an example of what he considered to be the unsuitably heavy bits used by the British cavalry, in comparison to the simpler lighter bits used by most Australian troops.