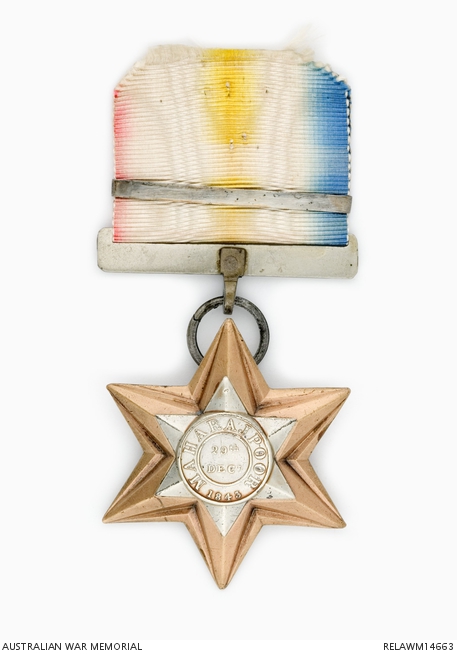 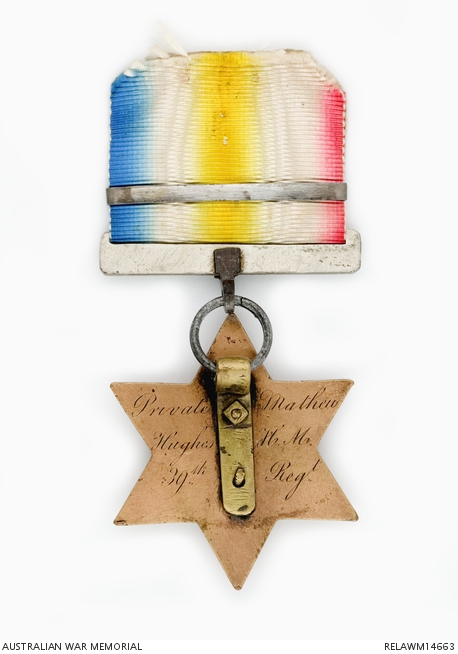 Maharajpoor Star. Engraved reverse with recipient's details. Obverse: The centre of the main six pointed bronze star carries a small (29 mm diameter) silver star of the same pattern, in the centre of which is the date '29TH DECr', in two lines. Around the date is the name of the action 'MAHARAJPOOR 1843', for which it was awarded. Reverse: Plain except for the naming. A brass bar loop for the loose ring suspender and bar attached to the star by two threaded studs and square nuts (one missing). A piece of 45 mm rainbow pattern watered red, white, yellow, white and blue is fitted to the suspender bar.

Awarded to Private Mathew Hughes of the 39th Regiment. The stars, made from Indian guns captured during the battle, were approved in January 1844 and granted to all troops who had taken part in the campaign under General ir Hugh Gough to defeat the Mahrattas in a fortified position at Maharajpoor. Originally the stars were issued with hooks for suspension but were changed to include a ribbon bar suspender fitted to a loose ring. This medal is part of a collection assembled by the late Hon. Sir Thomas Hughes, Member of the Legislative Council of New South Wales. It was presented to the Memorial in memory of his son, Captain Roger Forrest Hughes, Australian Army Medical Corps, who died of wounds in France on 11 December 1916 and his grandson, Flying Officer Peter Roger Forrest Hughes, 12 Squadron, Royal Australian Air Force, who was killed on active service while flying in the Northern Territory on 3 October 1942.