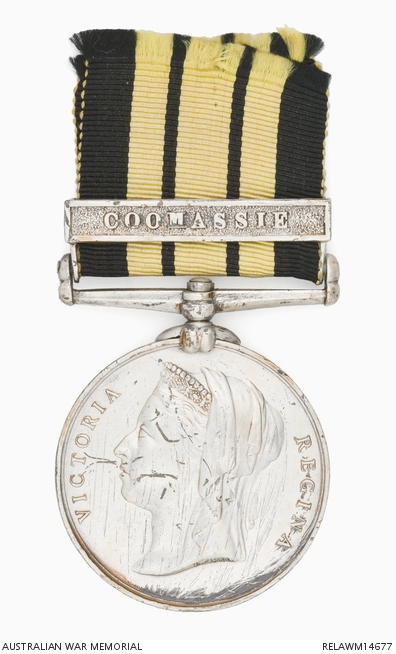 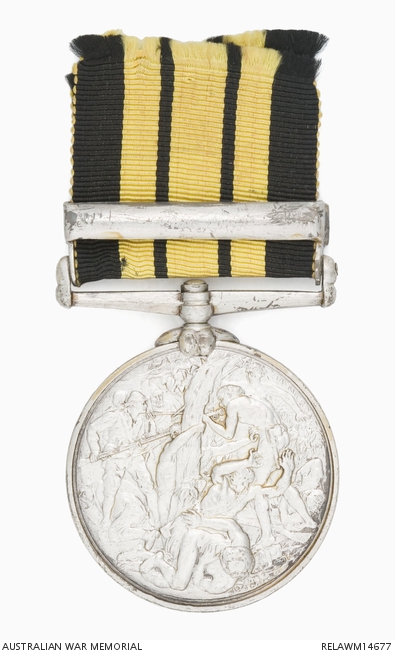 Ashantee Medal with the bar 'COOMASSIE'. The recipient's name and regiment are engraved around the edge. Obverse: The diademed and veiled head of Queen Victoria with the legend 'VICTORIA REGINA' around the circumference. Reverse: A scene of bush fighting around a tree between British soldiers and natives. The medal is fitted with a straight bar swivel suspender and a single rectangular campaign bar. A piece of 33 mm yellow ribbon with black boarders and two thin black stripes down the centre is attached to the suspender.

Awarded to Private H Hawthorn, Royal Marine Light Infantry who served with Major-General Sir Garnet Wolseley's campaign against the Ashantis, under King Kofi Karikara, between 9 June to 4 February, 1874. The chief cause of the war was the transfer of the Port of Elima from the Dutch to the British (2 April, 1872). The King had received an annual payment from the Dutch for its use but when the British took over this was stopped. In January 1873 an Ashanti army moved south across the Pra river and attacked friendly tribes of the British Gold Coast Protectorate. Wolesley was sent to rectify the situation. The bar 'Coomassie' was given to troops present at the Battles of Amoaful (21 January, 1874) and the actions around Coomassie, including its capture on 4 February,1874. This medal is part of a collection assembled by the late Hon. Sir Thomas Hughes, Member of the Legislative Council of New South Wales. It was presented to the Memorial in memory of his son, Captain Roger Forrest Hughes, Australian Army Medical Corps, who died of wounds in France on 11 December 1916, and of his grandson, Flying Officer Peter Roger Forrest Hughes, 12 Squadron, Royal Australian Air Force, who was killed on active service while flying in the Northern Territory on 3 October 1942.