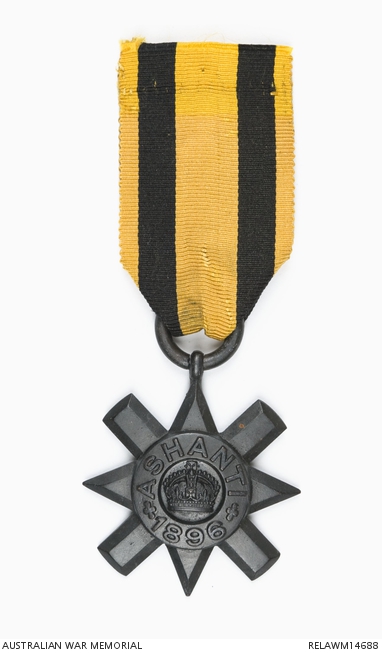 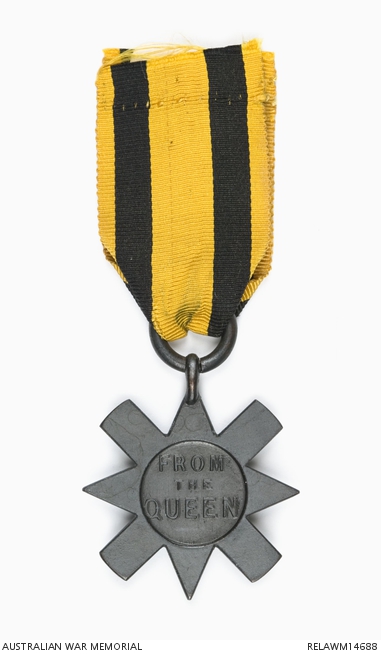 Ashanti Star 1896. Issued unnamed. The Medal takes the form of a four pointed star with a St Andrew's Cross between the arms. Obverse: In the centre is the imperial crown surrounded by a raised band which bears the word 'ASHANTI' above and the date '1896' below. Reverse: In raised lettering are the words 'FROM THE QUEEN' in the central circle. The medal is fitted with a ring suspender from the top uppermost point of the star and has a piece of 31 mm yellow ribbon with two black stripes.

The Ashanti Star is reputed to have been designed by Princess Henry of Battenberg, whose husband died of fever during the campaign. It was awarded in 1896 to members of Major General Sir Francis Scott's expedition against the Ashantis, led by King Prempeh (Kwaka Dua III), who served between 7 December 1895 and 17 January 1896. The expedition was undertaken to enforce British demands that the Ashanti Kingdom agree to become a British Protectorate. The non payment of the indemnity of the earlier1874 treaty and claims of human sacrifice provided further claims for action. This medal is part of a collection assembled by the late Hon. Sir Thomas Hughes, Member of the Legislative Council of New South Wales. It was presented to the Memorial in memory of his son, Captain Roger Forrest Hughes, Australian Army Medical Corps, who died of wounds in France on 11 December 1916, and of his grandson, Flying Officer Peter Roger Forrest Hughes, 12 Squadron, Royal Australian Air Force, who was killed on active service while flying in the Northern Territory on 3 October 1942.