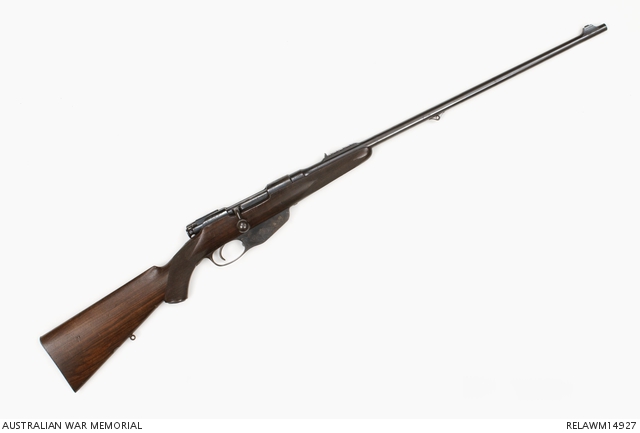 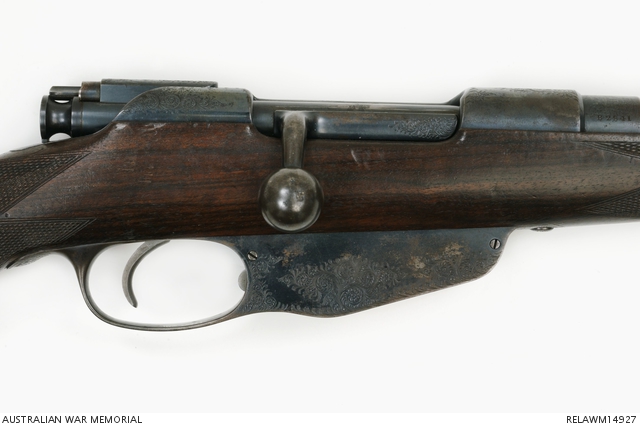 Mannlicher Model 1897 bolt action sporting rifle. The receiver is marked STEYR 1897 and is engraved with a floral design. The stock has a checkered fore end and pistol grip. A silver disc, engraved P A Cronjie is inset on the lower edge of the butt near the sling swivel loop and there is a small trap lid on the base of the pistol grip. The barrel has a fixed rear sight with four individual flip up leaves and there is a sling swivel loop brazed to the underside. All metal parts on this weapon have been blued except for the checkered butt plate.

This rifle was found by 198 Private Thomas Gunning in the trenches at Paardeberg after the surrender of the Boer General Piet Cronje there, together with 4150 of his commandos, on 27 February 1900. Gunning, who was a member of the 1st New South Wales Mounted Rifles, had arrived at Cape Town with his unit on 17 February and was invalided back to Australia later in the year, arriving home on 6 December 1900. He had served previously in the NSW Sudan Contingent.

The New South Wales Mounted Rifles (NSWMR) did not fight at Paardeberg but took part in the action at Poplar Grove, near Bloemfontein, the Boer capital of Orange Free State, on 7 March. Thomas Gunning was detailed to escort members of his unit who had been wounded in the action back to Kimberley for rest and treatment. Passing through the Paardeberg battle field on the way he picked up this rifle, together with a second rifle and an ammunition bandolier, as a souvenir.